« Are This Season’s Huge Passing Numbers Leading To More Points?
The Pressure Is On: Week 3 »

Inside the Numbers: A Chronicle of Tom Brady & New England’s Dominance Against Buffalo 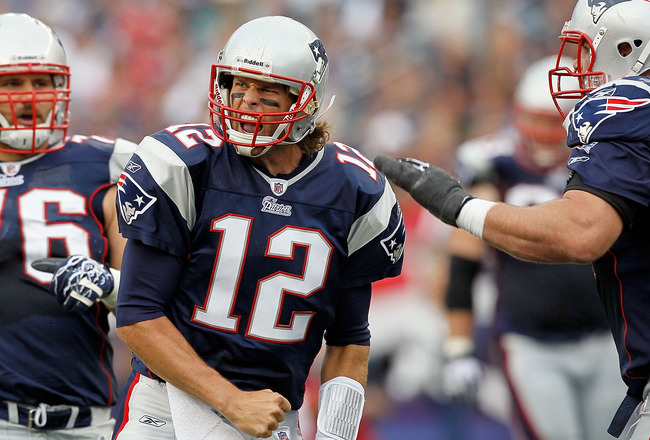 Tom Brady has a reason to be pumped. The NFL's top rated passer is coming to Buffalo, where he's 7-0 since 2004

It’s not as though the Buffalo Bills don’t have a history of being attached to some infamous streaks.  From 2001-2006, the Bills lost 13 straight in games decided by three points or less.  They went 0-for-the 1970s, losing all 20 games in that decade to the Miami Dolphins.  It wasn’t until Sept. 7, 1980 they finally ended their 0-20 drought.  It’s been 11 years since Buffalo had been to the playoffs in 1999.  If you want to add more gas to the fire, the last time they won a playoff game was 1995.  That’s a string of 15 years.  And sadly, the most obvious and heartbreaking streak of all, losing four straight Super Bowls.

So, whenever you mention Buffalo and New England, you can’t help but go directly to the Patriots’ 15-0 current winning streak over the Bills.  Fifteen up.  Fifteen down.  The last time Buffalo beat New England was the opening game of the 2003 season.  Armed with a couple of former Patriots looking for sweet revenge (Drew Bledsoe and Lawyer Milloy), the Bills blitzed the Patriots 31-0.  Tom Brady threw a career-worst four interceptions.  From that moment, Buffalo’s resistence has been futile.

The closest margin of defeat has been one point.  In 2009, opening on Monday Night Football, Brady returned under center after missing the final 15 games in 2008 with a torn ACL he suffered against Kansas City in the first game of the season.  He rallied New England to two touchdowns in the final 2:06 and the Patriots escaped with a 25-24 victory.  The largest?  It wasn’t attractive.  In New England’s record breaking 2007 season, Brady and company embarrassed Buffalo 56-10.  Brady threw five touchdowns, four of them to Randy Moss.  The Patriots led 35-7 at halftime.

One of the more interesting dynamics of the Bills’ 15 straight defeats is how much of a quandry it is at home versus playing up at New England.  In the past seven seasons, the Bills have beaten double digits six times at Ralph Wilson Stadium.  2009 was the only exception when the Bills came up short 17-10.  Buffalo has come much closer and faired much better in Foxborough.  In the past eight meetings at New England, the Bills have lost by 10 points or less five times.

Getting back to the mystery of why the Bills have made it an annual habit of getting blown out at home, clearly the puzzle starts and ends with Brady.  He’s been simply super and surgical against the Bills.  Let’s take a look at Brady’s numbers and the success the Patriots have enjoyed against the Bills at Ralph Wilson Stadium.

It seems as though the more you see of Brady, the better he becomes.  That’s just what the greats ones do.  No one thought he’d throw for 50 touchdowns and lead the Patriots to near undefeated season.  Maybe many thought that would be the apex of Brady’s career.  How do you come back and even attempt to top that?  And yet last season, he threw for 36 touchdowns and only four interceptions, the highest TD-to-INT ratio ever in the NFL.

His support cast has changed over the years.  His playmakers have varied from pedestrian to Pro Bowl.  He helped revitalize Wes Welker and played a big part in resurrecting Randy Moss.  He’s turned water into wine with the likes of David Givens, David Patten and Troy Brown.  He turned Deion Branch into a Super Bowl MVP.

This has been a seven-year mystery the Bills haven’t been able to solve.  The first attempt to end a 15-game losing streak in year eight won’t be any easier.  New England has scored 30 points in 10 straight regular season games dating back to last season.  While Brady has gotten better with each passing year and the Patriots have elevated to elite status, the Bills have been two steps behind.  It’s the equivalent of entering a roller derby and only using one skate.

Buffalo is long overdue to find their other skate.  Until they do, Tom Brady and the New England Patriots will continue to lead the race.