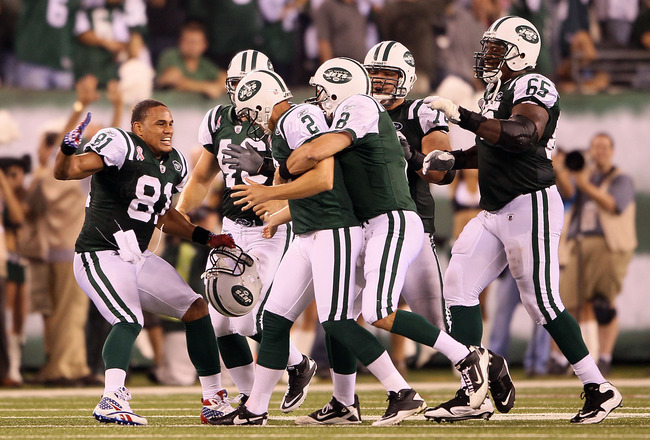 It has only been one week of play, but we learned a lot about the New York Jets after their 27-24 victory over the Dallas Cowboys.

Mark Sanchez showed he could step up and lead the team as the running game struggled to do much of anything.

Aging veterans LaDainian Tomlinson and Plaxico Burress showed they still have some gas left in the tank. However, it wasn’t all good.

The offensive line desperately missed Damien Woody, the offense failed to score in the first quarter again, and Antonio Cromartie got beat for multiple touchdowns.

Read about those storylines and more as part of the 10 biggest storylines from the Jets’ season opener.

1. The Training Wheels Are off Mark Sanchez

The New York Jets have been known for their “ground and pound” style of play under Rex Ryan. Behind a strong offensive line, the Jets have ran the ball as much as anyone and as effectively as anyone over the past two seasons.

Now in year three of the Rex Ryan, Mark Sanchez era that appears like it is no longer the case. In Sunday night’s game, the Jets threw the ball 44 times, compared to just 16 runs. That matched the most passing attempts in Sanchez’s career and was the most pass heavy game since Ryan took over as coach.

Sanchez responded well, completing nearly 60 percent of his passes and throwing for 335 yards. Even as the running game improves, expect the Jets to pass a lot more than they have in previous years.

All offseason all we heard about was how the New York Jets were ready to give Shonn Greene the lion’s share of the work in the backfield as LaDainian Tomlinson took a back seat. That was hardly the case in Week 1.

While Greene outpaced Tomlinson in carries ten to five, both of them were on the field for the same amount of plays. Also, Tomlinson proved extremely valuable as a receiver out of backfield leading the Jets in receptions (six) and yard (73).

Tomlinson looked fresh and like the better back. Don’t go writing off Tomlinson just yet.

Damien Woody retired in the offseason, leaving a gaping hole at right tackle for the New York Jets. The Jets had hoped second year man Vladimir Ducasse would step up, but he has been a massive disappointment.

That left journeyman Wayne Hunter as the only option at right tackle. Hunter was decent in a few starts last season after Woody went down with an injury. However, that wasn’t the case on Sunday night.

DeMarcus Ware terrorized Hunter whenever he lined up on his side. He beat Hunter or one sack and was putting pressure on Sanchez all night long. Granted, Ware is among the best in the game, but it wasn’t a great start for Hunter.

4. Mark Sanchez Can Win a Game by Himself

The New York Jets failed to establish much of anything on the ground against the Dallas Cowboys. They ran the ball 16 times for just 48 yards, good for a 2.8 yards per carry. Their longest run of the night was for seven yards. If you have watched the Jets at all the past couple seasons, you had never seen anything like that.

With the running game staled, it was up to third year quarterback Mark Sanchez to step up and lead the Jets to victory. And step up he did. Sanchez threw for 335 yards, only one off his career high, and two touchdowns.
While he did turn the ball over two times, he led the Jets back from down 14 points to victory in regulation.

He did all of this with no running game to take pressure off of him and while getting harassed by DeMarcus Ware and company all night long. The Jets can feel confident now that they can win because of Mark Sanchez, not in spite of him.

Through three quarters of Sunday night’s game, Plaxico Burress was a non-factor. It appeared as if his first game with the New York Jets would go down as a forgettable one.

Then, seemingly out of nowhere, Burress came alive in the fourth quarter hauling in four receptions for 72 yards and a beautiful over the shoulder touchdown grab helping to spar the Jets comeback effort.

After watching last night’s game, it’s no surprise why the New York Jets made a serious run at Nnamdi Asomugha in the offseason.

The man they signed instead, Antonio Cromartie, got beat for touchdowns by Dez Bryant and Miles Austin. Cromartie struggled to be psychical with these receivers both at the, line letting them have a clean release, and in the air, losing the fight for the ball.

Cromartie has a chance to rebound next week against the Jacksonville Jaguars, who have one of the worst receiving corps in the league.

7. Darrelle Revis Had an Interception

Darrele Revis had a forgettable start to the 2010 season after holding out all of training camp, injuring himself in the second week of the season. With a full training camp under his belt this season, Revis was back to being his usual self from the get-go.

After Antonio Cromartie was got beat a couple times by Dez Bryant, the Jets shifted Revis over to Bryant. Bryant had one catch early on Revis, but then wasn’t heard from for the rest of the game.

With the Dallas Cowboys driving to take the lead late in the fourth quarter, Revis undercut a pass intended for Braynt intercepting it, setting up the New York Jets up for the win.

With that interception, Revis now has more interceptions (one) than he did all of last season (zero).

After Darrelle Revis picked off Tony Romo it seemed like a New York Jets win was inevitable. However, after the Jets managed to gain just two yards on the subsequent three plays, the result of the game was up in doubt.

As Nick Folk lined up to attempt a 50-yard field goal, you couldn’t find a Jets fan willing to bet that Folk would make the kick. Then, Folk drained the kick right through the uprights giving the Jets the lead for good.

It had to feel good for Folk to start the season off by nailing a game winning 50-yard field goal. Hopefully, that confidence will carry over for the rest of the season.

Most of the blame last night was on the offensive line. Mark Sanchez didn’t have enough time in the pocket and it wasn’t a surprise the Jets didn’t score their first points until they went into two-minute-drill mode.

The New York Jets were expected to pressure Tony Romo and for the most part they did a good job. The Dallas Cowboys inexperience on the offensive line showed at times and the Jets took advantage.

In total, the Jets sacked Romo four times and pressured him a good amount. It was great to see Calvin Pace record a sack, as hopefully this is the year he records double-digit sacks.