« Dolphins White To Stay At QB After Promising Offseason
Packers QB Rodgers Slams Kornheiser, Jaworski – Then Takes it Back » 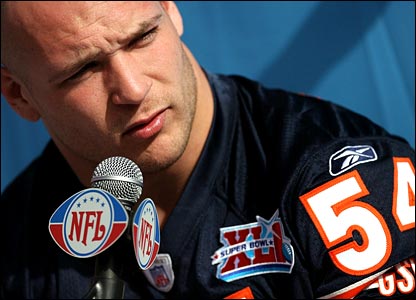 In addition to paying to watch mediocre football for four months, Bears season ticketholders also paid handsomely for the chance to ask Brian Urlacher a question over the phone.

During a conference call with a group of season ticketholders, the face of the franchise said some nice things about some of his new (and old) defensive teammates.

“I think most importantly it will help our secondary, and if you help them you help our whole defense,” Urlacher said. “It’s going to help our DBs out because they don’t have to play coverage very long. As linebackers, we can break. When the quarterback looks [to a receiver], we know to go because if he pumps it he’ll get sacked.”

Urlacher on the return of Chris Harris…

“He helps us all. He gets us all in position. What I like about it is if I screw up, he’ll tell me I screwed up. Sometimes you don’t have guys who do that. [New guys] don’t want to step on anyone’s toes. But Chris knows where we’re supposed to be. He knows what’s going on out there and it’s nice to have him back there.

I like it when a guy will do that. Lance [Briggs] will tell me when I screw up, the guys up front will. But it’s nice to have a guy in the back end [Editor’s Note: ‘That’s what she said’] who will do that.”

“I watched him practice three years ago in spring practice. They wouldn’t let him do much in practice because coach [Urban] Meyer said he hits too hard.

Thank you chicagobears.com for the snippets.