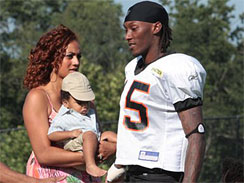 Charlotte-Mecklenburg police have announced that Bengals receiver Chris Henry has died, one day after suffering serious injuries upon falling out of the back of a pickup truck in what authorities describe as a domestic dispute with his fiancee.

Away from the team because of a broken forearm, Henry was rushed to the hospital Wednesday after being found on a residential road. Police say a dispute began at a home about a half-mile away, and Henry jumped into the bed of the pickup truck as his fiancee was driving away from the residence.

Police said at some point when she was driving, Henry “came out of the back of the vehicle.”