« Ravens Thinking They are Not Getting Enough Respect
Report: Thee More College Studs Coming Out – Crabtree, Wells and Maclin »

One Key Trait That All Final 8 NFL Teams Have 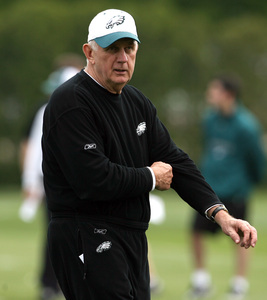 You’ve heard the old adage that says “Defense wins championships.” Maybe it does. Or maybe it’s just defensive coaching. The most glaring commonality among the NFL’s final eight teams – and something that no one seems to have yet noticed – is that all eight have excellent defensive coordinators. Take a look:

By far the most popular head coaching candidate on the market right now. Thanks to his aggressive and creative use of the front seven, Spagnuolo has received an enormous share of the credit for New York’s Super Bowl run last season. And he’s perhaps done an even better job this season.

Arguably the preeminent defensive play-caller of this decade. Johnson’s quasi-46 scheme can give any offense fits, mainly because the master does such a tremendous job of customizing it for each opponent. Johnson also has a preternatural ability to spot and develop raw talent.

The Cardinals defense has been sub-par throughout most of this season, but experts will tell you that it’s not the coordinator’s fault. NFL inner-circles admire Pendergast for having such a variegated, flexible scheme. Apparently, so do the Cardinal; he was one of the few coaches on Ken Whisenhunt’s staff who was retained after Denny Green got fired.

The most unknown of the remaining D-coordinators just happens to have one of the steadiest records. Entering this season, the Panthers had finished ranked in the top 10 in defensive yardage four times in six years. They fell to No. 18 this season. However, as Carolina’s 12-4 record indicates, Trgovac may have his best defensive unit since the ’03 Super Bowl squad.