NFL’s Toughest Stadiums to Play In 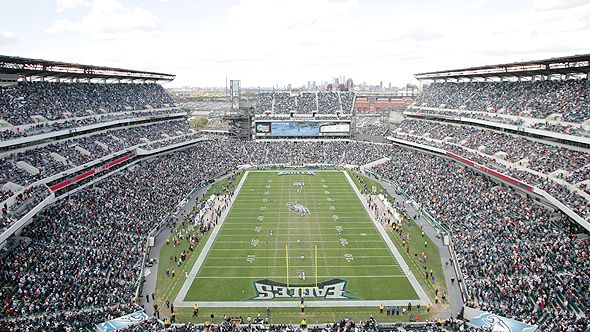 Something to discuss as we get ready for Sunday action.

Let’s get into it.

Here are my top eight toughest places to play in the NFL.

It isn’t as rough as the Vet was, but Philly fans are the rowdiest in the NFL. Think of every bad word you said that caused your mom to wash your mouth out with soap and multiply it times 10,000. I was called every name in the book when I was out there, and I wasn’t even remotely close to superstar status. Eagles fans don’t care if you play 2 snaps or 60—they will get after you. They can also make some noise, when the Eagles are up, and boo their own guys when they are down. I broke my foot my second year in the league and an old lady saw me on crutches trying to get on the bus and threw a couple of F-Bombs my way—nice.

I don’t like talking about domed stadiums (football is meant to be outside), but the Metrodome personifies my argument. It is old, out of date, and resembles a dirty marsh mellow—but boy, can it bring the noise when it wants to. Men dressed up as Vikings ride out of the tunnel on snowmobiles to start the game, a unique Viking horn is played after every 3-yard gain, and I swear they pump crowd noise into that place. When I was a Packer it was my favorite environment to play in—because of the challenge. The old turf (before Field Turf) was so bad, so awful, so old that you could trip over the seams or the outlines of the pitching mound used for the Twins. If you are looking to donate some extra cash, send it to the Vikings and tell them to build a new stadium—without a roof.

This place really has nothing to do with the actual stadium itself, because it is brutal and generic, but it has everything to do with the fans– dressed in black, dressed like Halloween, dressed like death. But, you gotta love them. They cheer and dress like Skeletor for a team that hasn’t won in a while, but they are loyal, they care about football, and they love the silver and black. Plus, their players are enormous. When those guys came out of the tunnel in those black jerseys, I would look at our guys and think, “We don’t have a chance to beat these guys up front,” and pray that the big guys never got their hands on the ball. I wished they still played in the LA Coliseum and not a place that doubles as a poor excuse for a baseball stadium, but the fans make up for it. It can get scary out there.

I compare this place to Yankee Stadium. It has all of the tradition, all the history, and I still believe ghosts of the Packers past, who seem to turn the tide in Green Bay’s favor at just the right time, haunt it. I love the new place, but the “Old Lambeau,” with the concrete steps down to the field from the locker room, the green aluminum siding that bordered the stadium walls, and the falling snow in route to another Packer victory was priceless. Plus, visiting teams talk and think about the cold weather all week long. There was nothing better than watching Brett Favre throw fast balls in the snow, or the look on the opposing team when they lined up for the opening kick-off. “We have to play a whole game in this weather?” Yes sir, get ready to take a beating and welcome to Green Bay, Wisconsin. Did I mention, that the players call smell the brats roasting from the parking lots?

“Can anyone else breathe out here?” That was the question I would always hear (sometimes from my own mouth) when we went out to warm up for the game. The thin air is no joke, and there is a painted sign on the wall right outside the visiting locker room in Denver. “Welcome to Denver and Mile High, Elevation 5,280 Feet.” That’s what it really says, and it is the first thing on your mind as you prepare to play 60 minutes of football. Throw in the weather that can change at any moment—snow, rain, ice, wind– and you have a recipe for disaster. The fans are great too: passionate, knowledgeable, and tough. Plus, every time you fly into Denver on the team charter, you are convinced that the winds are going to toss you into one of the mountains. I would rather take a bus out there to play.

Surprised? Well, you shouldn’t be. Playing in Tampa looks and sounds nice—you fly in over the Gulf, see the palm tress, and the beaches, and then settle in for what you had no idea was coming: an abnormally loud crowd and pirate ships. I don’t know what the fans are drinking during those tailgates, but my wife was scared watching me play in Tampa, and that equals a good football crowd in my mind. Throw in the fact that there players are intimidating (especially on defense) and those cannon ball blasts that come from the make believe pirate ship in the end zone—complete with fans drinking margaritas and yards of beer atop them like captains of the fleet—and it can be a long day. I was a part of the game when Warren Sapp (after blasting Chad Clifton) challenged Packer coach Mike Sherman after the final gun. It is the most intense game I have ever played in. And there was plenty of cannon ball blasts to give me a headache.

Not so much this year, but Arrowhead can rock. It is the only place in the NFL that reminds me of playing college football on Saturdays. The music is loud, the fans are loud, and the stadium itself (set in the middle of nowhere) comes out of the ground—begging you to challenge it. The parking lots are jammed hours before game time, and you feel like you are rolling up in Madison, Wisconsin to play the Badgers with the amount of people dressed in red—shouting in your face. When the Chiefs are playing good football it is a hell of a place to play. Plus, the barbeque in the parking lot after the game is second to none. I went there as a rookie with the 6-0 Rams, and have never been that beat up on a football field in my life. It is just too bad that the Chiefs can’t use that home field advantage this year.

They advertise the 12th man out in Seattle, and it comes to life on Sundays at the best overall stadium in my mind. Sure, it is brand new, but whoever designed it deserves a pat on the back. The overhangs above the upper deck vibrates crowd noise all Sunday long—and it is, without a doubt, the loudest football stadium I have ever played in (Sorry Ohio State). The fans aren’t rowdy like in Philly, but they know how to support their team. I went there in the 2005 playoffs with the Redskins, and couldn’t talk to the guy standing next to me, and that was after it took us over 6 hours to fly all the way out there. Also, the fans never sit down—all they do is scream for the Hawks. I loved the challenge of playing there, but never the result. I never won a ballgame there.

One Response to “NFL’s Toughest Stadiums to Play In”