Top Five Draft Steals and Busts For the Chiefs Since 1990 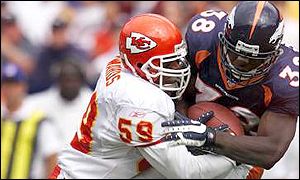 When you think of Carl Peterson if you are a Chiefs fan the first thing you think of is training camp hold outs. Unsigned first round picks, draft blunders and busts. But to his credit Carl has had his moments whether they were moments of genius or pure dumb luck is debatable. Notable players off the list are anybody drafted in the first our second round because they are expected to produce. Or any player selected by the Chiefs who went on to become a star and develop on another team like Joe Horn.

5. Dave Szott: 7th round 1990 Snatched out of Penn Sate in the seventh round I am sure King Carl knew this guy was going to be a anchor on his offensive line for the next 11 seasons. Teamed with Will Sheilds and Tim Grunhard to form the best interior line in football for many years.

4. Donnie Edwards: 4th round 1996 Has played 51% of his career in Kansas city if he had played his whole career here he would probably be a lot higher on the list. Did not get to play much as a rookie but once he got a starting spot the following year. He never looked back and went on to amass over 1300 tackles in his career.

3. Dante Hall: 5th round 2000 Played seven productive seasons in Kansas City. For a three year stretch was the best kick returner in the league. Helped produce several victories simply off his return abilities. All kickers knew not to kick to the X- factor. Even made it on the Letterman show not bad for a 5″8 180 pound running back from Texas A&M.

2. Jared Allen: 4th round 2004 Almost could not make the list because of the Joe Horn rule but in his four seasons he played with Chiefs he did amass 43 sacks. If he would have stuck around he would have had a mathematical shot at DT’s all time sack record. File this one under dumb luck for Carl since Jared was drafted as a long snapper..

1. Will Shield: 3rd round 1993 Future hall of famer. Former NFL man of the year. The one memory. I will always have of Will is the Monday night game a couple of years ago against the Ravens when Ray Lewsis was miked up and Shields flat out dominated him. Late in the third quarter the sound bite being played going into commercial break was Lewis screaming “I can’t do anything they’re blocking me they’re blocking me” That is what will Shields did to defenders for years.

5. Sylvester Morris: First round 2000 Drafted out of Jackson State had a successful rookie season going for 678 yards and 3 touchdowns. After his rookie season injured his knee and never played football professionally again. The Chiefs search for a true # 1 receiver would continue for several seasons.

4.Junior Siavii: Second round 2004 Taken to correct the Ryan Sims mistake Junior only compounded the problem. His second round status was questioned by the experts from the beginning. Over matched in his two seasons in Kansas City. When Herm came to town he cut him loose. Out of football for two seasons resurfaced on the Dallas Cowboy?s practice squad this year.

3. Percy Snow: First round 1990 If you watched Hard Knocks last season you might have noticed people traveling on bicycles across the campus of River Falls Wisconsin University. Percy is the reason for that. His second season was cut short when he injured himself in a moped accident missing his entire second season never regained his form and was eventually cut loose by the Chiefs.

2.Trezelle Jenkins: First round 1995 Nick named The House coming out of college played in only 9 games in 3 seasons for the Chiefs. Never showing any signs of hope. In 2000 was drafted by the San Francisco Demons of the XFL but failed to make the team. Now runs a Harolds Chicken Shack in Detroit.

1.Ryan Sims: First round 2002 Never made any kind of impact what so ever. Was supposed to be the anchor of the defensive line. Could be the Chiefs worst draft pick of all time. His lack of production set the Chiefs defense back years. Eventually traded to Tampa Bay for a seventh round pick