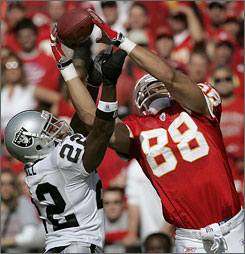 The Kansas City Star reported that Chiefs and TE Tony Gonzalez are ready for QB Brodie Croyle to “have a good year.” Croyle has been participating in offseason workouts to gain chemistry with the team, especially the 12 year veteran, Gonzalez. “This is our third year together,” Croyle said about playing with Tony Gonzalez, “We still have to keep working on chemistry. That’s critical. That’s why I’m here.”

So far its paid off, “I think he’s looking great,” Gonzalez said on Croyle. “And I think he will have a good year. It’s his time.” The record breaking Gonzalez wants Croyle to take a leader role for the offense, starting in the huddle. “Absolutely, he has to be in command of the huddle,” Gonzalez said. “It’s his huddle. For a quarterback to be effective it has to be his huddle.”

Gonzalez isn’t the only receiving option with hope in Croyle. “Brodie’s looking good, man,” WR Dwayne Bowe said. “He threw a go route, back shoulder, against the wind. It was on the money. I was like, ‘Dude, you’re ready. It’s on.'”

The Chiefs have two capable starting quarterbacks in Damon Huard and Brodie Croyle. Right now the it seems to be Croyle’s job to loose. Last season, Croyle was the top passer in two of his last six losses in 2007: Game 15 against the Titans (217 yards, two touchdowns, two interceptions, and a 58.1 completion percentage.) and Game 17 against the Jets (195 yards, one touchdown, three sacks and a 46.5 completion percentage). Reportedly, Croyle’s quickly picked up the new offense, and the offensive coordinator Chan Gailey’s stystem is working with Croyle. Now Croyle must prove to the Chiefs he can win games after a poor 2007. “He’s up, and it’s his turn to show that he can be a starting quarterback in the National Football League, and not only that but to win games,” coach Herman Edwards said. “I think he knows that he’s been waiting for his opportunity.”