« Can the Chiefs Trust the QB Spot to Croyle?
Offseason Overviews: Breaking Down the NFC East » 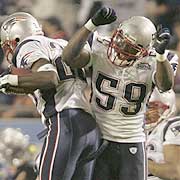 Former Bears and Patriots linebacker Rosevelt Colvin did an interview earlier today on Sirus NFL Radio, and stated that despite his release from the Pats this offseason, he’s already gotten some calls from teams in regards to his services. Two teams that Colvin pointed out as being in contact with are the Cleveland Browns and the New York Jets, two teams that could use some help at the LB spot.

Last season Colvin played in 11 games, making just 27 tackles, four sacks and one interceptions. In five seasons with the Pats, he was never quite the player they thought he would be. His first season was scrapped with an injury that ended his season after just two games. In 2004 he had just 32 tackles, and in 05 61. In Chicago his best season was 2001, when he had 70 tackles, 10.5 sacks and two picks.

Colvin pointed out his history with Browns coach Romeo Crennel, who was the Pats D-coordinator during part of his tenure there. He was a fourth-round pick of the Bears back in 1999. Colvin will land a job somewhere, and you can bet the Browns and Jets will keep their options open to seeing where he fits in there plans.