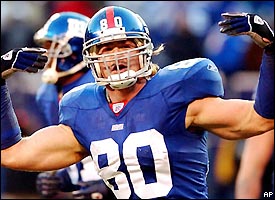 The deal that a lot of people thought was going to done did not on draft day, as the Saints and Giants were unable to pull a deal off for tight end Jeremy Shockey.  It was a deal that was talked about a lot leading up to draft day, and many thought it was going to go down early in the draft.  The deal was supposed to include a second-round pick going to the Giants from New Orleans, but reports say that the Giants wanted more, and that’s when the deal broke down.

“There was a lot of talk but very little activity,” Giants coach Tom Coughlin said.  Could the deal still get done?  Probably not, considering the thing the Giants wanted were draft picks, and now that the draft is done and gone, the Giants will likely keep their tight end and go into the season with he and second-year TE Kevin Boss.  As for the Saints, they will keep the looking for tight ends, but who knows if they will find one the quality of Shockey.