Dolphins to Look at O-Line Free Agents With Great Interest 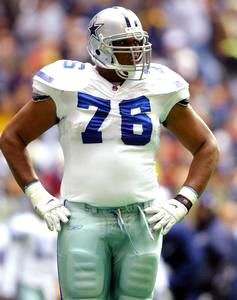 As free agency gets closer and closer, the Dolphins, still with that 1-15 season in mind, are starting to forge ahead and put last season behind them and are looking to address the needs of the ball club.  One need will be on the offensive line, as last season it was yet another position on the team that underperformed.  According to the Miami Herald, the Fins will be looking to add a tackle, as well as two guards.

The tackle spot will be to replace L.J. Shelton, who was let go, and the two guards from last season, Rex Hadnot and Chris Liwienski are not going to be re-signed.  So where do the Fins turn?  There are some names out there that they can go after, the first of which is Cowboy Flozell Adams, who was not franchised and will be a free agent Friday.  The 32-year-old left tackle will have plenty of teams looking at him though, so a bidding war may ensue for his services.

The tackles after Adams on the market include the Jags Maurice Williams, 9’ers Kwame Harris and the Skins Jason Fabini, who is 33.  This could be a spot unless they can get a deal done with Adams that the team may have to fill with a draft pick or someone currently on the roster.

Then at guard you have the prize of the free agent class – Pittsburgh guard Alan Faneca, who will command top dollar.  He’s been linked to Miami according to the Herald, but some say he’d like to go to a team that is in a position to win right away.  The Cardinals, Bears, Jets, Eagles and possibly Seahawks are all going to push for his services.

Other than that, you have the Saints Jamar Nesbit, 9’ers Justin Smiley, Hawks Floyd Womack, and Titans Jacob Bell.  This is a position critical to the success of the Fins, and look for there to be plenty of O-line moves made by Miami early on in free agency.