Fassel Speaks Out on Being Passed Over for Skins Job 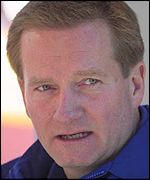 As the book turns on Jim Fassel, the one-time Giants coach and candidate who was passed over for the position of head coach of the Redskins is coming out and talking about not getting the position.  The Skins made a surprise move on Saturday, passing over Fassel, who seemed to be the front runner for the spot, and instead going with unproven Jim Zorn, who was hired two weeks ago to be the teams offensive coordinator.

“There was something going on behind the scenes, there’s no question about it,” Fassel told CBSSports.com. “I thought things were falling my way, then, suddenly, this happens. It’s strange.” Dan [Snyder] wanted to make a big splash, and I think he was worried about the Baltimore thing,” Fassel said, referring to being fired from Ravens as their offensive coordinator during the 2006 season. “He worried about the public relations, and he didn’t know which way to go. I heard someone say there are no more George Youngs or Jim Finks in this league, people who really know the game. And I think that happened here. I don’t think Dan surrounded himself with enough football people.”

The move to go with Zorn was met with surprise around the NFL.  Fassel was considered the front runner for about the past two weeks, and each time there appeared to be a decision from Snyder coming, Fassel’s name was close to if not at the top of the list to be the new head coach.  One has to wonder why Synder would take a huge chance on Zorn, who will be under fire from day one, while Fassel continues to sit on the sidelines and wait for another top coaching spot to come his way.  When that will be is anyone’s guess.