« Redskins vs. 49ers preview: By the Numbers
Bills Have Been Helpless Stopping the Run Against Jets »

Home Cooking: Bills Going for Five in a Row at Home 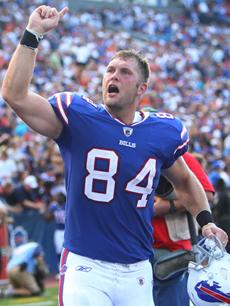 Tomorrow afternoon, the Buffalo Bills will be shooting for a five game “home” winning streak against their division rival New York Jets.  Of course, home is emphasized a little bit here because Buffalo’s annual game in Toronto is considered to be a home game for the Bills.

So with that little technicality aside, the Bills are 4-0 at home this season and aim for home win No.5.  The last time the Bills won five in a row at home was 2004.  That year, Buffalo began the season a miserable 0-4 and dropped their first two games at home.  However, the Bills went on to win their next five home games while winning nine of 11 games after losing their first four.  During their five-game home winning streak, the Bills held their opponents to 17 points or fewer while scoring at least 20 points in all five games.

Buffalo’s win streak included victories over Miami, Arizona, New York Jets, St. Louis and Cleveland.  The Bills held those five teams to average of 13.6 points per game while scoring more than double the total of points they allowed, averaging 30.8 points per game.  The Bills scored 37, 37 and 38 points in three of their five consecutive home victories.  On a down note, the Bills ended their 2004 campaign at home the way they began: with a loss.  Buffalo lost their home and regular season finale to Pittsburgh 29-24 denying the Bills one of the final playoff spots in the AFC.

Before 2004, the Bills also won five in a row at home in 1998.  Strangely enough, the Bills also started that season winless (0-3), but finished the season 10-3.  After losing their first game at home to St. Louis, Buffalo won their next six home games beating San Francisco, Jacksonville, Miami, New England, Indianapolis and Oakland.