Can Bills Add Insult to Injury to Eagles, or Will Eagles Save Their Season at Bills’ Expense? 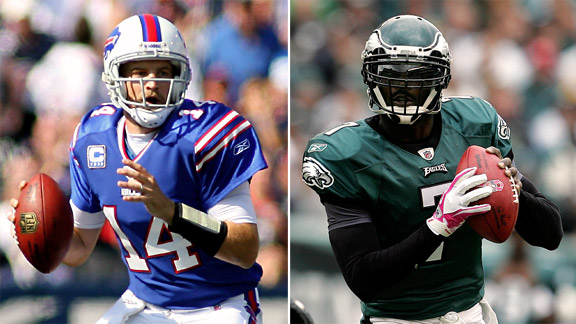 Maybe Vince Young would like to have that phrase back.  I’m sure everyone recalls Young’s remarks when asked during the start of training camp about the kind of team the front office of the Philadelphia Eagles assembled.  Young’s response:  dream team.

Young wrote a check that (as the third string QB) the rest of his teammates were going to have to cash.  He put a big, bright red bullseye on Philadlephia’s back.  Management spent close to $100 million in free agency.  Michael Vick was rewarded with a $100 million dollar contract.  Everyone expect big things from the Eagles.

But so far, the Eagles have come up rather small and everyone’s trendy Super Bowl pick from the NFC sits at 1-3, losers of three in a row, and last in the NFC East.  Now, all the Buffalo Bills have to do is pull off a win and essentially bury the Eagles’ season.  That in itself figures to be a difficult task.  Not because of the talent the Eagles have, but because their season is on the line,  jobs and reputations are at stake and there is no tomorrow for Philadelphia.

Few have correctly predicted the different roads the Bills and Eagles have traveled down so far in 2011.  If you were to take a poll and have people guess which team would come into today’s game 3-1, my guess is it would be unanimous that the Eagles would be the overwhelming choice.  Good thing games aren’t played in polls.  The Bills are 3-1 and tied atop the AFC East.  They solved Tom Brady a couple of weeks ago.  Now they take a stab at trying to solve Vick.

Philadelphia’s problems are abound.  They put a lot of time and effort into revamping their defense in the offseason.  But the Eagles are 30th in the NFL on defense against the run giving up 140 yards rushing per game.  Defensive coordinator Juan Castillo has been the object of the fan’s anger and he’s come under harsh fire for his play calling and lack of in-game adjustments.  Free agent prize cornerback Nnamdi Asomugha has looked average.  Andy Reid’s coaching seat is getting warmer.  Injuries are starting to add up.  As you can see, it’s not been all cheese whiz and fried onions for the birds.

Very easily, however, the Eagles could be 4-0 if it weren’t for their inability to shut the door in the fourth quarter.  They have led in the fourth quarter in each of the last three games but have been outscored 36-0 in the final quarter during their three game losing streak.  Buffalo, however, could easily be 1-3 had it not been for a couple of fantastic comeback wins against Oakland and New England.

The Bills face maybe their biggest challenge this season in trying to devise a game plan to slow, contain or stop Vick.  If either of those three options are plausible.  Vick has the capabilty to take over the game with his arm and dominate the game with his legs.  Already he’s surpassed the 1,000-yard passing mark while rushing for 228 yards.  That could spell trouble for the Bills run defense which is still very much a work in progress.  Buffalo is coming off a loss against Cincinnati in which the Bengals imposed their running will on the Bills with 170 rushing yards on 32 carries, particularly dominating in the second half.  Eagles running back LeSean McCoy has a pair of 100-yard plus rushing games and four rushing touchdowns with 5.5 yards per carry average.  Against San Francisco, McCoy carried the ball only nine times for just 18 yards and that’s likely to change against the Bills.  Expect McCoy to get close to 20 carries.  He also presents a threat out of the backfield as a pass catcher and for the screen-happy Eagles, they could gash the Bills’ defense which has struggled against screens.

Perhaps Buffalo should attack Vick and the Eagles offense the same way they did Brady and the Patriots.  The less they’re on the field the better their chances to win.  Enter Fred Jackson, who also had four rushing touchdowns including a touchdown in three straight games.  Jackson has rushed for 369 yards at a 5.8 ypc clip.  Last week was the first time the Bills were outscored in the fourth quarter (10-3), but they’ve managed to outscore their opponents in the fourth quarter 48-31.

PREDICTION:  Eagles 33, Bills 21.  This is a big spot for both the Bills and the Eagles.  Buffalo is coming off their first loss of the season and some of their early season darlings luster has worn off a bit.  Now the Bills must circle the wagons, regroup and prove to rest of the NFL and themselves that they have short memories and last week’s loss was just a bump in road.  On the other hand, the Eagles are in do-or-die mode.  Their backs are up against the wall and a loss here all but dooms their season.  I think there’s too much talent, particularly on offense for the Eagles to keep losing.  Despite the Bills being at home, as the Eagles are concerned desperation = dangerous.  Vick, McCoy and company prove to be a little too much for the Bills’ defense to handle.