Jets vs Raiders: Winners and Losers from Gang Green’s Loss 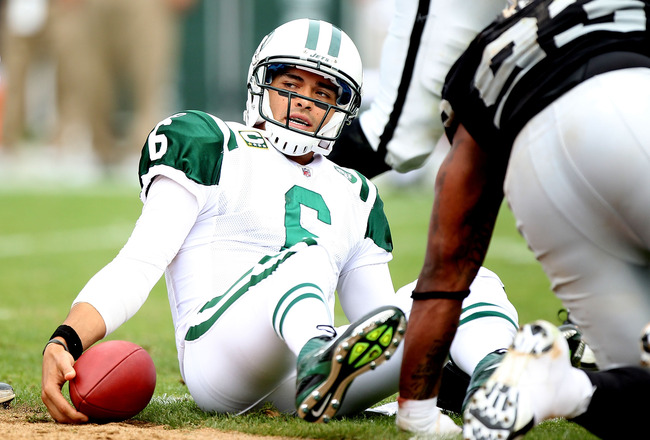 The New York Jets blew an opportunity to gain a one-game lead on the New England Patriots in the AFC East, falling 34-24 on the road to the Oakland Raiders.

The Jets got behind early, then jumped out a 17-7 lead before seeing the Raiders score 24 unanswered points.

The Jets again had problems running the ball and once again passed the ball significantly more than they ran it. On defense, they couldn’t tackle anybody, couldn’t pressure the quarterback, and didn’t force any turnovers.

It wasn’t all bad for the Jets though, as there were a few bright spots in the loss.

The Jets now have a brutal two-game stretch coming up as they play the Baltimore Ravens and New England Patriots, both on the road.

Before we move ahead to next week though, let’s take a look back at some of the winners and losers from the Jets loss to the Raiders.

Antonio Cromartie talked a big game heading into this week, calling himself a better playmaker than the man the Jets tried to replace him with, Nnamdi Asomugha.

Cromartie was certainly a playmaker, only he was making plays for the Oakland Raiders.

A week after being named AFC Defensive Player of the Week, Cromartie was anything but this week. He was flagged for four, yes four, penalties. The officiating was spotty at best, but that still doesn’t excuse the penalties.

Cromartie also lost a fumble on a kickoff return in which he bobbled the return and then tried to pick it up instead of falling on it. The Raiders took advantage of the field position and extended their lead to 14 points, all but sealing the victory.

To top it all off, Cromartie left the game with a rib injury. Sunday was not Cromartie’s finest day at the office.

LaDainian Tomlinson was an Oakland Raiders killer during his time with the San Diego Chargers and lived up to his name on Sunday.

Tomlinson was lethal as a receiver out of the backfield. He took a screen pass and rumbled 74 yards only to be tackled just short of the goal line. He also ran a perfect route on a 18-yard touchdown reception. In total, Tomlinson led the New York Jets in receiving yards with 116.

Tomlinson was also effective on the ground. He ran for 38 yards on just six carries, including a 20-yard run.

Despite being written off numerous times by many people, Tomlinson keeps showing you can’t count him out.

While LaDainian Tomlinson was excellent on Sunday, the same can’t be said for his backfield mate, Shonn Greene.

Green had a great opportunity this week facing an Oakland Raiders defense that was just gashed by Fred Jackson the previous week. However, Green disappointed, managing just 59 yards on 15 carries.

Greene showed nice power, but his speed and acceleration were lacking. He wasn’t fast enough hitting the hole and too often got stuffed at the line of scrimmage.

He did manage to catch all seven of his targets, but only gained 47 yards, lacking the explosiveness to break a big gain.

Greene hasn’t shown he can be the lead back for the Jets, and if he doesn’t improve soon, a move down the depth chart could be in order.

Every New York Jets fan got to know the name Colin Baxter this week. The undrafted rookie from Arizona was making his first career NFL start, filling in for the injured Nick Mangold at center.

Thought to be a huge liability heading into the game, Baxter played reasonably well considering the circumstances.

There were no botched snaps nor did he commit a penalty. The offensive line as a unit committed only one false start. He was partially responsible for a sack on one play, but that is to be expected.

With Mangold expected to miss at least a couple more weeks, the Jets can be confident knowing they have Baxter to fill in.

Rex Ryan says his team is built on two things: running the ball and suffocating defense. Neither of those things were present in the New York Jets’ 34-24 loss to the Oakland Raiders.

Darren McFadden shredded the Jets defense for 171 yards on the ground, including a 70-yard touchdown scamper. The Raiders simply overpowered the Jets.

Ryan’s defense was not able to get any pressure on the quarterback and only brought down Jason Campbell once all afternoon.

The running game was decent, but you expected a better performance after seeing how the Bills ran all over the Raiders last week.

This Jets team we saw on Sunday looked nothing like a Rex Ryan-coached team. They played extremely sloppy on defense and passed the ball 63 percent of the time.

After watching the Jets so far this season, this is looking like the new norm and not just a trend.