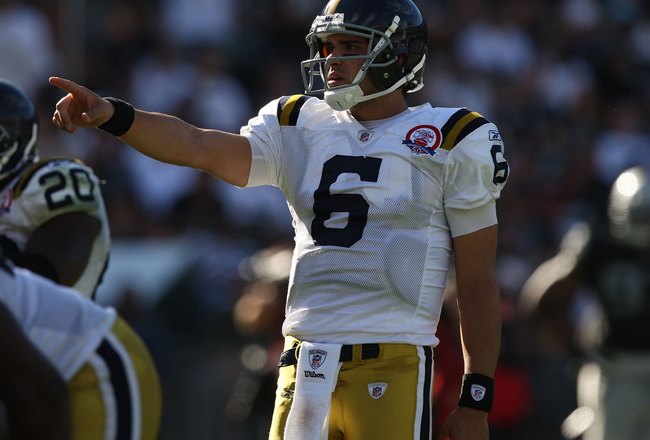 The New York Jets travel to Oakland to take on the Oakland Raiders in one of the better games in Week 3.

There will be plenty to watch as these two teams square off on Sunday. The Jets appear to have the edge heading into this game, but it won’t be easy. The Jets have had their struggles on the west coast recently and have some bad memories of Oakland, losing there in the playoffs in 2002 and 2003.

The Raiders have looked impressive so far, sparked by an offense led by Darren McFadden, who is averaging nearly 150 total yards per game. The Jets will have their hands full with him.

For the Jets, they will try to get their ground game on track, but that will be harder without Nick Mangold in the lineup. The burden will fall on Mark Sanchez, who has been uneven in the season’s first two game.

Here are 10 things to watch this Sunday as the Jets take on the Raiders.

How Will the Raiders React

The Oakland Raiders lost a thrilling heartbreaker to the Buffalo Bills in Week 2, derailing their hopes of starting the season 2-0.

The Raiders led 21-3 at halftime and had the lead at three different points in the fourth quarter, only to lose in the final seconds.

To blow that lead and lose in the fashion they did would be tough for any team to swallow. The loss will linger in the minds of some of the players for the entire week.

The question now becomes how they respond. Will they get off to a slow start because they haven’t put the loss behind them or will they come out firing out of the gates trying to avenge their loss?

How Will the Jets Play on the West Coast

The west coast hasn’t been kind to the New York Jets in recent years.

In 2008, the Jets traveled west four times (Oakland, San Diego, San Francisco, Seattle) and lost all four games despite having a better record than all but one of those teams. However, they did gain some positive momentum when they traveled to Oakland in 2009 and put a beating on the Raiders, defeating them 38-0.

Still, some teams struggle to adjust and the Jets have a habit of starting slow so we’ll see if that affects them.

On the plus side he was very accurate with his passes, completing over 70 percent of this throws. At one point he was 11 for 13, though his two incompletions were interceptions. He also was effective scrambling out of the pocket, rushing for 29 yards.

Ryan Fitzpatrick and Kyle Orton both had success throwing against this Nnamdi Asomugha-less secondary and Mark Sanchez will look to continue that trend on Sunday.

Will the Jets Overlook the Raiders

Many teams are guilty of looking ahead on their schedules. It’s human nature. For the New York Jets, Sunday’s game against the Oakland Raiders is a textbook case of a potential overlooked game.

Following the Raiders game, the Jets have a brutal four game stretch ahead featuring games at Baltimore and New England and home games against the San Diego Chargers and Miami Dolphins. The Jets will probably be favorites in just one of those games.

It wouldn’t be a surprise to see the Jets play sluggish as they are focused on the games ahead. Hopefully, the Raiders strong play to start the season will prevent them from overlooking them.

How Will Colin Baxter Play

Colin Baxter has big shoes to fill and not just literally. With news spreading today that Nick Mangold is out for the foreseeable future with a high ankle sprain, the undrafted rookie from Arizona will be thrown into the spotlight.

Mangold is undoubtedly regarded as the best center in the NFL and has started every game at center for the Jets since he entered the league in 2006.

Baxter just joined the Jets after final cuts, so he has only been with the team for a few weeks. When forced to play on Sunday, Baxter predictably struggled.

He will have a full week of practice as the starting center to gain better timing with Mark Sanchez and the rest of the offensive line. How he performs could go a long way in determining if the Jets are victorious.

Can Denarius Moore Keep It Up

Thanks to injuries to Jacoby Ford and Darrius Heyward-Bey, training camp sensation Denarius Moore got a chance to start in Week 2 and took full advantage.

Moore finished with five catches for 146 yards and one touchdown. His 50-yard touchdown grab was a thing of beauty, as he snatched the ball at its highest point in between two Buffalo Bills defenders.

Things won’t be as easy this week against the New York Jets. The Jets have arguably the best corner tandem in the league. However, Antonio Cromartie is prone to getting beat deep every now and then and Moore could exploit him down the field.

Will the Jets Ground Game Get Going

The New York Jets are built on “ground and pound” football and have led the NFL in rushing the past two seasons.

So far in this young season, the Jets ground game has struggled to get going. Shonn Greene and LaDainian Tomlinson have combined for just 99 yards in the first two games. They are 2-0, but it hasn’t been because of their ground game.

Now they will have to play without Nick Mangold—their best offensive lineman—which certainly won’t help.

One reason for hope is Shonn Greene’s past performance against the Oakland Raiders. As a rookie in 2009, Greene had the best game of his career against Oakland, rushing for 144 yards and two touchdowns, averaging 7.6 yards per carry.

Rex Ryan and the Jets would love nothing more than a repeat of that performance.

Can the Jets Stop Darren McFadden

Darren McFadden has been electric in the first two games of the season, terrorizing opposing defenses.

McFadden did most his damage on the ground in Week 1, shredding the Broncos for 150 yards. He came back in Week 2 as a dual threat, ripping the Bills for 143 total yards.

The New York Jets might have dominated the Jacksonville Jaguars on the scoreboard, but one area where they got beat was in the run game. The Jaguars had 112 yards and averaged over four yards per carry.

If McFadden can gash the Jets, this game will be very interesting.

Who Will Darrelle Revis Guard

Darrelle Revis has as just as good as advertised so far this season, if not better. He has blanketed Miles Austin and Dez Bryant, among others.

The Oakland Raiders don’t have a true number one receiver, so it will be interesting to see who Revis matches up with.

The Jets could place him on Denarious Moore, who had a breakout game last week. They could also move him around on different receivers like they did against the Jacksonville Jaguars.

Can the Raiders Offense Keep It Up

The Oakland Raiders offense has been very impressive so far in this season, averaging 29 points per game.

However, it should be noted that they did it against the Denver Broncos and Buffalo Bills. They haven’t faced a top notch defense yet, but will this week when they take on the New York Jets.

This will be the real measuring stick for the Raiders offense. If they can score consistently against the Jets defense, they have a chance to compete for a playoff berth this season.

Jets 23, Raiders 16 – The Jets finally find some success on the ground and control the clock, beating the Raiders in a hard-fought contest.