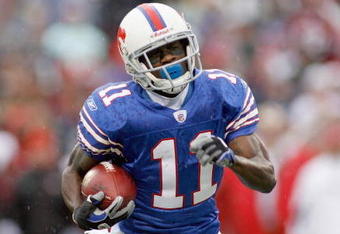 For the second year in a row, the Buffalo Bills have lost the services of wide receiver Roscoe Parrish for the season.

The Bills have placed Parrish on injured reserve with a left ankle injury he suffered in last Sunday’s victory against the Oakland Raiders.  Parrish was injured in the second quarter while blocking on Steve Johnson’s 19-yard catch.  He was down on the turf for several minutes before he was carted off and taken to the locker room.   Parrish finishes the year with just one catch for 16 yards in two games.

This makes it two straight years that Parrish has suffered a season-ending injury.  Last year, he missed the second half of the season after fracturing his wrist against the Chicago Bears in Toronto.  Entering the final year of his contract, Parrish’s injury history over the past two seasons means there’s likely no gurantees that he’ll be back in Buffalo in 2012.

In Parrish’s absence, David Nelson will become the primary slot receiver and C.J. Spiller will hand the punt returning duties.  To make room on the roster, the Bills have promoted WR Naaman Roosevelt to the 53-man squad.  Roosevelt appeared in six games in 2010 as an undrafted rookie.

The injury to Parrish further clouds the Bills’ receiving situation.   This unit once had great depth, but now they suddenly look thin at wide out.  Lee Evans was traded to Baltimore during the abrupt offseason.  A heart ailment landed Marcus Easlye on IR after Week 1 and now unfortunately Parrish makes it two wide receivers landing on IR in as many weeks.  Steve Johnson is battling a nagging groin injury.   Buffalo’s other options at wide out are Roosevelt, Ruvell Martin and Brad Smith.  Spiller could see an increased role in the passing game.