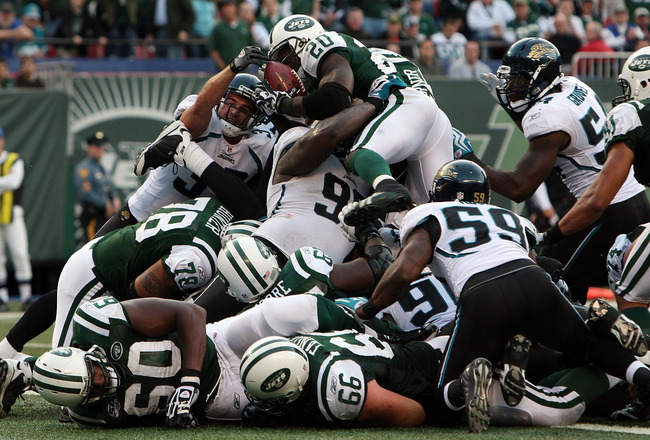 The Jacksonville Jaguars travel to MetLife Stadium Sunday to take on the New York Jets in one of the best games on tap for Week 2.

Both teams enter the game 1-0 after sweating out victories in the first week’s final seconds. The Jaguars surprised most people playing well despite the fact that starting quarterback David Garrard was released one week before the season.

It took a while for the Jets to wake up, but thanks to special teams play and some Tony Romo blunders, the Jets escaped with a victory.

Looking at this matchup, there are a ton of things to watch for. After going pass heavy last week, will the Jets balance it out more this week? Who will they feature at running back, Shonn Greene or LaDainian Tomlinson?

For the Jaguars, can Luke McCown continue to play turnover free football and what will happen if the Jets shut down Maurice Jones-Drew?

Keep reading to find out 10 things to watch in the Jets-Jaguars Week 2 matchup and my prediction for the game.

1. How much Will the Jets Pass the Ball

Rex Ryan has admitted that in retrospect, he would have liked to run the ball more against the Cowboys.

However, the Jacksonville Jaguars completely shut down start Titans running back Chris Johnson last week, limiting him to 24 yards. If they bottled up Johnson, how will the Jets run on them?

No offense to Shonn Green and LaDainian Tomlinson, but they aren’t in Johnson’s class. If the Jets struggle early on to run the ball, like they did in Week 1, will they stick with it or air it out?

2. How Many Carries Will Shonn Greene Get

Heading into the season, Shonn Greene was expected to be the feature back for the New York Jets.

In Week 1, Greene only tallied 10 carries for 26 yards. LaDainian Tomlinson had just five, but averaged more yards per carry than his teammate.

Also, Tomlinson was extremely valuable in the passing game and both were on the field for the same amount of snaps. It will be interesting to see if the Jets give Greene a healthy does of carries or lean more on Tomlinson.

3. How Will Luke McCown Play

Luke McCown was anointed the Jacksonville Jaguars starting quarterback a week before the season opener after David Garrard was unceremoniously released.

Thrown into the fire, McCown preformed admirably in Week 1. He threw for only 175 yards, but completed a superb 70.8 percent of his passes and most importantly, didn’t turn the ball over.

Playing the New York Jets defense will be a much tougher challenge though. If McCown turns the ball over multiple times, the Jaguars can kiss their chance of winning goodbye.

4. Will the Jets Run More No-Huddle

Will the New York Jets trailing the Dallas Cowboys by 10 points late in the first half, the Jets decided to run a no-huddle offense on their final possession in an attempt to try and spark the offense.

It worked to perfection, as the Jets marched down the field for a touchdown before the first half ended, giving them some momentum heading into the second half.

After looking uneasy for the majority of the first half, Mark Sanchez came alive on that drive. He thrived working the no-huddle and the Jets may want to run that offense more often this Sunday.

5. How Involved Will Deji Karim Be

In Week 1, the Jacksonville Jaguars went with a run-heavy attack, pounding the ball against the Tennessee Titans.

However, Karim wasn’t that effective averaging only 2.4 yards per carry. Karim is going to have to show something against the Jets to warrant that many touches.

6. Will Mark Sanchez Turn the Ball Over

Despite the rampant success of his brief two-year career, Mark Sanchez has continually struggled with turnovers. He cut down on his interception total by 7 last year, but he still needs to improve.

He turned the ball over twice in Week 1, and both proved crippling. One was nearly a pick-six and the other was a fumble in New York Jets territory as the Jets were driving to tie the game.

Now in his third year, he can’t afford to be making this many mistakes. His turnovers nearly cost the Jets the game last week. That can’t be the case this week if the Jets expect to come away with a victory.

7. Who Will Step up at WR for the Jags

Despite the rampant success of his brief two-year career, Mark Sanchez has continually struggled with turnovers. He cut down on his interception total by 7 last year, but he still needs to improve.

He turned the ball over twice in Week 1, and both proved crippling. One was nearly a pick-six and the other was a fumble in New York Jets territory as the Jets were driving to tie the game.

Now in his third year, he can’t afford to be making this many mistakes. His turnovers nearly cost the Jets the game last week. That can’t be the case this week if the Jets expect to come away with a victory.

8. Can the Jets Protect Mark Sanchez

The New York Jets offensive line was in poor form Sunday night allowing four sacks to DeMarcus Ware and the rest of the Dallas Cowboys.

Wayne Hunter was the main culprit, but it wasn’t just him. The usually reliable D’Brickashaw Ferguson had fits dealing with Ware.

While the Jacksonville Jaguars don’t boast a pas rush as imposing as the Cowboys, the offensive line needs to play better. After last week’s game, Mark Sanchez looked groggy and even took a concussion test because he was on the ground so much.

If Sanchez can stay upright for most of the game, the Jets will have a great chance to win this game.

Coming into the season there was a lot of doubt about how Maurice Jones-Drew would play. The talented running back had offseason surgery on a bone-to-bone condition and many predicted he wouldn’t be the same back anymore.

While Jones-Drew didn’t set the world on fire, it was nice to see him run for nearly 100 yards and a touchdown.

It won’t be nearly as easy this week against the New York Jets. The Jets are one of the stingiest teams against the run and they bottled up Felix Jones last week.

If Jones-Drew can’t get going on the ground and if Darrelle Revis shuts down Mike Thomas, the Jacksonville Jaguars offense will struggle to do much of anything on Sunday.

10. Will the Jets Get off to a Slow Start

The New York Jets have made it a habit to get off to slow starts. They have now gone 16 games in a row (one season’s worth) without scoring a touchdown in the first quarter.

The Jets are heavy favorites in this game. They can’t let the Jacksonville Jaguars gain confidence by hanging in the game. They need to come out firing from the start and put this game out of reach early.

Jets 20, Jaguars 13 – The Jets rarely blow any one out and the Jets will find a way to make this game interesting. In the end though, I seem them pulling out a victory.