« 2011 Free Agency: Grading The NFC South
The Browns, Cowboys and Redskins Will Attend Terrelle Pryor’s Workout Friday; I Predict 8 Others »

Tim Tebow Slipping on the QB Depth Chart in Denver? 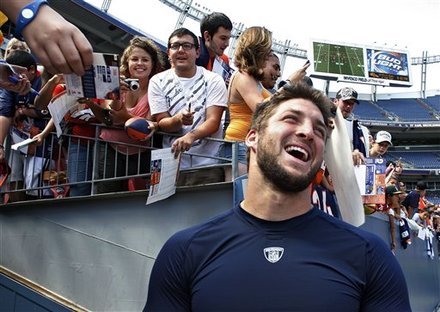 First John Fox put Kyle Orton right back in as the teams starting QB when he didn’t get traded to the Dolphins. Now is Brady Quinn moving up the charts ahead of the Broncos golden-boy – Tim Tebow?

There’s been a lot of talk about how poorly Tebow has been looking during camp, and how the pressure of a QB competition may have gotten to him. Now, as you read below from Pro Football Talk, Quinn is taking charge of the #2 QB spot.

After a lackluster performance in the team’s scrimmage over the weekend, Tebow mostly watched Quinn get the majority of reps with the No. 2 offense on Monday, according to Josina Anderson of FOX31 and the Denver Post.

Tebow is No. 2 on the depth chart, but the Broncos brass may want to see how Quinn looks against better competition. He had a strong scrimmage against the No. 3 defense on Saturday.

Quinn was acquired in a trade with the Browns before last season, and he really hasn’t gotten much of a shot. All along, he’s said he has felt like he’s in the mix to be one of the top QB’s on the team. If he moves ahead of Tebow for the #2 spot, things will become even more interesting this summer at Broncos camp.