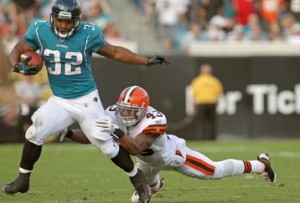 In case my flukesters need a reminder. Stay away from MJD! His knee is shot. I don’t care what Jacksonville says a player of his size can only take sooooo many beatings. His 2010 stats were average and not ”Pocket Hercules” like – 1342 yards rushing, 34 receptions for 317 yards, and only 5 TDS. Heck, his backup Rashad Jennings had 4 TDs. Jack Del Rio saved his job with an 8-8 record and nearly squeaked into the playoffs. Much of his survival was the play of David Garrad. Zebras don’t change their strips and besides improving their D and maybe grabbing a WR Jack Del Rio’s team will come back largely intact.

MJD is starting to show wear and tear. He no doubt will be in a 50-50 split with Rashad Jennings next year. In fact I wouldn’t be surprised if their 1000 yard rusher is Jennings not MJD. Those of you in keeper leagues strongly consider making a play for Jennings. Those in traditional drafts consider taking him in the double digit rounds. He may be the RB sleeper you will sorely need. Many people immediately consider MJD a first round pick just because of his name. Razzball just did a 1st round in a mock draft and MJD went 7th. Undoubtedly, this will be a huge mistake. At 7 I could list 5 players to take before Maurice.