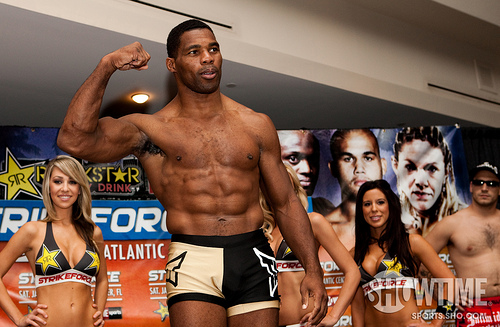 Herschel Walker sure has had a memorable career. The former NFL player has been not only one of the best RB’s in football at points in his career, he also was in the Olympics, and has been involved in MMA recently.

Now, as if that’s not enough, Walker wants to get back in the NFL. At 50 years old.

“I tell people I may even try out for football again and show people I can do that. I’d be the George Foreman of football and come back and do that one more time,” the 48-year-old Walker said on a conference call.

Walker will have his 2nd career MMA fight this weekend in San Jose against Scott Carson. He still thinks though that he can be competitive if he could get back on an NFL roster. “There is a 100 percent guarantee that today I could help a football team out,” said Walker.

Two years shy of 50, Walker is a beast. He’s as ripped as any guy out there, and says that he has a diet that isn’t exactly up to standards of most fighters out there.

“Most every nutritionist in the world has told me ‘You can’t do that. You can’t do that.’ And my thing is ‘Guys, I’ve been doing this for over 20-something years,” Walker said. “It’s not something that I just started doing because I’ve was turning into an MMA fighter. I was doing it when I was playing football. And it works for me. I’m not going to say it’s going to work for everyone else.”