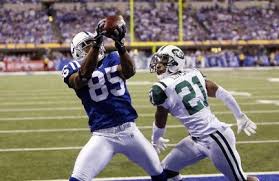 The Indianapolis Colts finished strong with a four-game win-streak, looking like their old selves. At 10-6, they will be facing a much-more improved New York Jets team than last year. The Jets are 11-5, but the Colts have the advantage. Accu Score predicts the Colts having a 64-percent chance of winning this game.

Indianapolis won last season in the AFC Championship game versus New York by a score of 30-17. They were down 17-6 to begin with, but a run with 24 unanswered points led to the victory.

I expect this game to be no different. The Jets are still young and I expect them to be easily one-and-done. Dominic Rhodes will be the key to this game. Joseph Addai is back and the Colts look to get their spark in the running game.

Indianapolis is the favorite to many in this game, and that is the way it should be.

Rex Ryan is eager to win this game.

“We are not going to Indianapolis to lose,” Ryan said. “We are going there to win. This is about this year, and I’ve waited a full year for this.”

Ryan has only beaten Manning once, when he was with the Ravens. But in the playoffs, he has struggled and even in Baltimore, too.

“I don’t know when I’m going to beat him, but I want it to be Saturday night,” he said. “Is it personal? Yes, it’s personal. It’s personal against him, Reggie Wayne, all those guys, yeah. (Dwight) Freeney and (Robert) Mathis and those other dudes? Absolutely.

“It kills you. You fight so hard to get into the playoffs and when you lose, it’s devastating. I want to put the shoe on the other foot, and I know our team does, too. I want (the Colts) to experience it this time.”

Manning is the key to the win, obviously. I expect him to make a final passing touchdown in the fourth quarter to end the game. Ever since the slump, Manning has been playing solid.

Manning’s numbers have dropped this season. Although he did have 33 touchdowns, which is second in the league, he had 17 interceptions and a 91.9 rating. The interceptions are his highest since his rookie year and his rating is his lowest since eight years. But that is still very very good.

“The numbers speak for themselves, and I think anytime you have a guy throw for 4,700 yards and 33 touchdowns, any team would take that,” Charlie Johnson said. “It just shows how productive he’s been.”