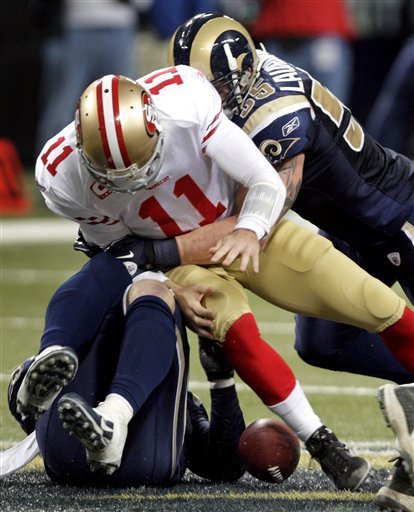 The Rams were able to finally secure a come from behind victory after losing at halftime to beat the San Francisco 49ers to keep their playoff hopes alive and finally officially eliminate the 49ers from the playoff chase.  The 49ers stayed in the game and even lead at halftime through big plays, one a punt return and another long pass play.  The Rams were able to effectively seal the game with another huge sack and forced fumble from defensive end Chris Long.  The Rams were able to stay in the drivers seat in the NFC West by holding off San Francisco with the assistance of their grateful home crowd.

The Rams came out quickly with their first drive throwing the ball quickly to the wide receivers.  The biggest play on the drive was a long pass by wide receiver Danny Amendola to Danario Alexander.  The pass was intercepted, but not before Alexander was interfered with.  Steven Jackson was able to punch the ball into the end zone from there.  The Rams soon had the 49ers pinned back inside their 5 yard line and a errant snap forced the 49ers to dive on the ball for a safety and the Rams lead 9-0.

In the second quarter, the 49ers were able to get back to what beat the Rams in their previous meeting: big plays.  The Rams were forced to punt and the Rams were unable to even touch Ted Ginn as he took a punt back for a 77-yard TD.    The Rams were only able to answer that score with a field goal and they gave the 49ers the ball back again.  After 25 yard pass on 3rd and long from inside their 20, the 49ers scored on a quick strike pass to Michael Crabtree.  Crabtree was able to shake a tackle and stiff arm another defender to run all the way into the end zone from 60 yards out.

The Rams and 49ers reached halftime and the 49ers lead 14-12 without even running a single play on the Rams side of the field.  The Rams defense was doing their job, but were allowing too many big plays.  The Rams offense was able to move the football at times, but other times they looked out of sort.  Too often when facing a halftime deficit, the Rams were unable to overcome it, but today was different.