Rams Fall in Battle of Missouri to Chiefs 27-13 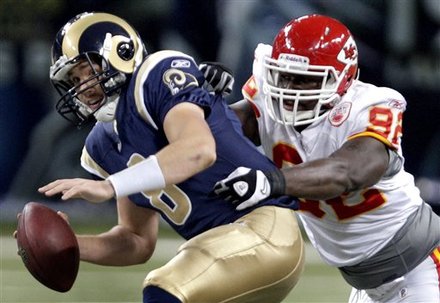 The Kansas City Chiefs traveled across the state to play the St. Louis Rams and brought a sizable portion of their fan base with them.  In a stadium that was about half Chiefs fans, the Chiefs were able to overcome a slow start to end up with an easy victory.  The Rams started out well, but could not overcome their mistakes and could not regain the momentum once it shifted to the Kansas City sideline and a late comeback by the Rams was quickly destroyed and Rams dropped to 6-8.

The Rams came out fast with a 13 play drive that had 63 of their 84 yards in the first half in the single drive. The Rams self-destructed at the end of that drive with two false starts in a row and had to settle for a field goal.  The Rams had more chances in the first quarter after a long kick return and after an interception.  But, with those drives starting in good field position, the Rams could only get one field goal and the Chiefs were able to switch the momentum.  The Chiefs took advantage of their opportunities and were able to score two touchdowns in the 2nd quarter to take a 14-6 half time lead.

The Rams offense could not run or pass as the first half wore on and the Chiefs began to dominate by keeping all their players up at the line of scrimmage which slowed the run and the Rams short passes.  The Chiefs diagnosed all the Rams screens and covered all their receivers down the field.  The Rams could not protect Bradford all half as their pass protection was repeatedly blown up by the Chiefs defensive line.

The second half was more of the same for the Rams offense as they were overwhelmed in every phase by a Chiefs defense that gave up 36 points last week.  The Rams game plan consisted of 1st down run straight ahead, a short 2nd down pass and a desperation 3rd down pass.  If one of those plays didn’t work correctly, the Rams offense would go 3 and out.  And they went 3 and out more often than not on offense against the Chiefs.  All in all, the Rams display on offense was pathetic.  Their offensive line struggled against the Chiefs 3-4 in running plays and passing plays.  Every Rams offensive lineman made at least one mistake.  Jason Smith and Rodger Saffold were overwhelmed.  Their receivers could not get open against the good corners that the Chiefs have.

The Rams finally got their first touchdown with 4:04 left in the game to pull the game to 20-13.  The Rams kicked it deep with 3 timeouts and desperately needed a quick stop to get the ball back with a chance to tie.  However, the Rams defense was overwhelmed by the Chiefs offense.  One huge 80 yard run by Jamaal Charles and a 2 yard TD run by Thomas Jones and the Chiefs were quickly up 14 points and the Rams hopes in this game were distinguished.

The story of the game here for the Rams was that they once again faced off with a good team and did not have enough talent to overcome their major problems on offense or defense.  Mistakes doomed the Rams as no one from the coaching staff to the ball boys could claim they had a good game.  The Rams were only able to score a touchdown once the Chiefs went into prevent defense.  The best news to come out of this game is that the Rams will return to the friendly confines of the NFC West for their final two games.  However, as badly as they have played over the past two games, their final two contests are far from sure things.