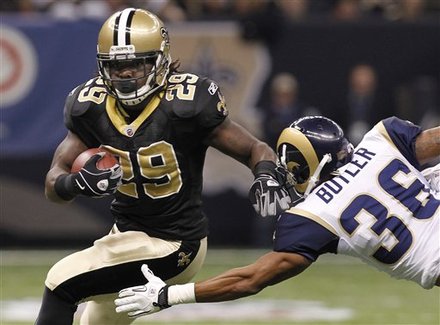 The St. Louis Rams headed to New Orleans hoping to spring the upset, but they were unable to take advantage of their opportunities or slow down Drew Brees and the Saints star studded offense.  The Rams hung with the Saints for a half, but were unable to strike when they had the Saints on their heels and the Saints had enough class to eventually see off the Rams challenge and win the game 31-13.

The Saints came out early against the Rams and were able to move the ball at will with quick outside runs and quick passes.  The Rams defensive line was not a factor and Drew Brees eventually completed a TD pass to Marcus Colston.  After the Saints touchdown, the Rams were able to move the ball until Steven Jackson fumbled at the end of a long run.  The Saints were able to turn that turnover into points and went up 14-0 near the end of the 1st quarter.  The Rams defense was unable to get within several yards of Brees and he picked the Rams secondary apart as the Rams were playing without their number 1 cover corner Ron Bartell.

When the Rams offense was able to hold on to the ball, they were able to move it down the field through Steven Jackson.  Jackson was running hard early in the passing game and the running game.

The Rams got their first stop midway through the 2nd quarter on a 4th down pass play that was dropped by Robert Meachem.  The Saints were between field goal range and obvious punting territory and the Rams counted themselves lucky that the Saints made a mistake.  The Rams were able to get another mistake from the Saints on the Saints next possession on offense as Bradley Fletcher picked off a Drew Brees pass intended for Colston.  After another field goal, the Rams did not let the Saints offense get back on the field before they forced another mistake.  The Saints fumbled the kickoff and the Rams recovered on the 21 yard line.  Counting the 4th down turnover on downs, the Rams were able to get turnovers on 3 possessions in a row as the 1st half ended.  They had all of the momentum and a chance to pull the game within one score before half time, but Sam Bradford made one of his worst throws of his short career and Malcolm Jenkins took the ball 96 yards for a touchdown to extend the Saints lead to 21-6 and to restore the momentum back to the home size.  The Rams got 3 turnovers in a row, but were only able to get 6 points and lost 7 points on Bradford interception.  The Rams and Saints went into halftime with the score 21-6.

Both teams came out after halftime and went 3 and out on offense.  The Rams were able to put together the first drive, but Laurent Robinson couldn’t find a Bradford pass in the end zone and the Rams were forced to try a long field goal.  Unfortunately, Josh Brown hooked the long field goal to the left and the Rams could not get the first points on the board in the 2nd half.  The Rams gave the Saints offense chance after chance to widen the lead and Drew Brees eventually found a wide open Lance Moore when OJ Atogwe and Quincy Butler bit on a pump fake.  The Saints eventually tacked on a field goal and the Rams scored a late consolation touchdown to get to the final score of 31-13.

The Rams defense that was without number 1 corner Ron Bartell needed a huge game from the defensive line and blitz.  The Rams did not get a sack until late in the game and rarely had a chance to even tough Drew Brees in the pocket.  Brees had plenty of time to find the open receiver against the Rams secondary.  Even though the secondary was able to get turnovers, it was not enough to slow down the Saints top flight offense.

In a game that offered very little good news for the Rams, they received good news from San Francisco as the Seattle Seahawks were blown out by the 49ers to keep the Rams in 1st place, even after dropping their record to 6-7.  So, overall, in Week 14, the Rams did not drop out of first place in the NFC West and still control their own destiny in the chase for the NFC West crown.  And that is a lot to say for a team that had won only 6 games over the past three seasons.