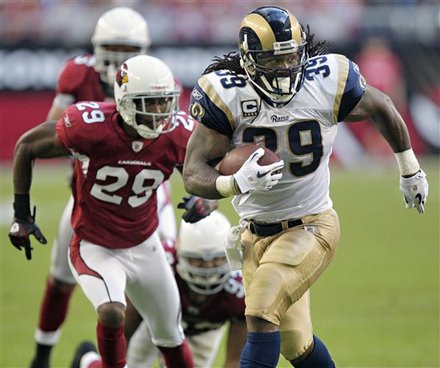 The Rams headed to Arizona to face off against an Arizona Cardinals team that they have not been able to beat in 8 games including a loss in Week 1 of 2010 in a game they should have won.  The Rams needed some revenge and to finally get a win on the road against a divisional foe.  The Cardinals were the perfect opponent to break those losing streaks as the Cardinals came into the game in disarray and the Rams were able to continue that misery for the Arizona squad.  The Rams started slowly, but were able to get their feet under them and dominate the 2nd half.  The Rams and Cardinals showed what a difference a quality quarterback makes.  The Rams were lead by Sam Bradford and the Cardinals tried three different quarterbacks without success.

The Rams defense started off very slowly against Arizona as their blitzes did not get to Cardinals QB Derek Anderson, but the defense did not break and allowed 2 field goals in the first quarter.  The defense continued to struggle against the run in this game, allowing big chunks of yards to either of the Cardinals running backs.  The Rams utilized the blitz early and often and it finally paid off as Derek Anderson got more chances to throw the ball.  Craig Dahl was able to secure his first career interception on a wildly thrown ball inside the red zone.  The Rams were able to move the ball down the field and get 3 points from that turnover and head into halftime leading 9-6 in a battle of field goal kickers.  The Rams would have hoped to have more as they were stopped inside the 3 yard line and had to settle for a field goal.  Sam Bradford had Daniel Fells wide open on 3rd and Goal, but Calais Campbell skied and knocked down the potential touch down.

The Rams played pretty badly for most of the first half, but had to be happy going into half time with a 3 point lead.  The defense especially had to be encouraged because they allowed chunks of yards to the Cardinals lightly-regarded rushing game.

The Rams opened the second half with the ball and Sam Bradford threw an uncharacteristic interception on the first 3rd down they faced, but the Rams defense was able to hold and force a punt.  The Rams were finally able to convert a few first downs and deploy their no-huddle offense to wear down the Cardinals defense.  The Rams offensive line finally was able to open a big hole for Steven Jackson and number 39 did the rest, kicking it into 5th gear and out running everyone for 27 yards and a touchdown.

The Cardinals were desperate for some production out of their quarterback position and turned to rookie QB Max Hall in the 3rd, who promptly was sacked, threw a deflected incompletion and an interception in his first series.  Bradley Fletcher jumped in front of Larry Fitzgerald to secure the interception.  The best thing to happen to the Rams defense was the Rams offense finally scoring points and forcing the Cardinals to throw the ball and abandon the running game which was working so well in the first half.  The Rams were able to turn the Max Hall interception into a field goal and a 19-6 lead at the beginning of the 4th quarter.

In the Cardinals next series, they went back to the run successfully, but Max Hall was sacked and fumbled and got injured on the play when he recovered the football, forcing the Cardinals to go with fellow rookie John Skelton.  Skelton was able to find holes in the Rams defense to pick up two first downs in a row, but the Cardinals offense self-destructed and the Rams forced them to punt.  The Rams stopped the Cardinals and finally got the ball back and salted the game away through high percentage passes and big Steven Jackson runs.  And in that way, the Rams secured their 6th victory of the season which equals the win total in the Rams previous 3 seasons combined.  The Seattle Seahawks also won, so the Rams sit in 1st place in the NFC West after 12 games at 6-6.  If I told you those last two sentences before the season, you would not have believed me, but the Rams have been able to get it done in a wide open NFC West.  The Rams took advantage of their opportunities against the Cardinals, just as they have all season.