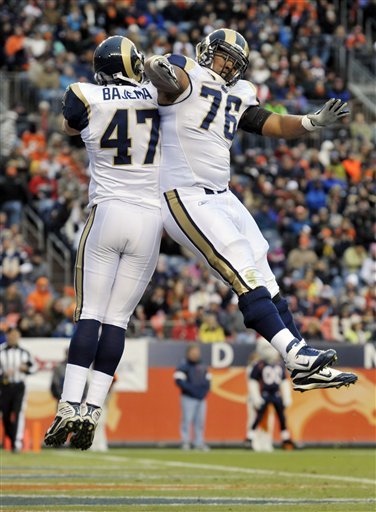 The Rams scored their most points of the season Sunday in Denver and they needed all of them to stave off a late Broncos rally in the 4th quarter to seal their first road win of the season 36-33.  The Rams began the game on the wrong foot and ended it on the wrong foot, but they scored enough points in the interim to beat the downtrodden Broncos.  The Broncos offense continued to exploit the Rams inability to limit the big play, but the Rams offense got some big plays of their own.  A lot went right for the Rams tonight including two turnovers and a triumphant return to the lineup for Danario Alexander, but they struggled at times as well.  It was not a wire to wire perfect victory for the Rams, but with the struggles they have had on the road, the Rams and their fans will certainly take it.

The Broncos started off with their high-flying offense getting a lot of yards on the ground as they pushed the Rams defense off the ball whenever they needed to open a quick 10 point lead.  The Rams finally stormed back through Sam Bradford and the Rams unheralded receivers.  Sam Bradford threw two TD passes to Billy Bajema and one to Michael Hoomanawanui in the second quarter as the Rams began to put the pedal to the metal against the soft Broncos defense.  However, one thing the Rams could not get going was Steven Jackson and the running game.  Adam Goldberg continually was ran over by the undersized Bronco defensive line and the whole line failed to get push against anyone on the Broncos defensive line.  The Rams offensive line is obviously built for pass protection and the Rams play-calling mirrors that construction.

The Rams went into the half up 26-13 and piled on a touchdown in the 3rd quarter before a frantic 4th quarter in which the Broncos scored 3 touchdowns and got within 3 points before the Rams recovered and onside kick and were able to get a key defensive stop with less than 30 seconds remaining.  Chris Long was able to get a key sack and key hit on Kyle Orton on the final series.  It would be easy to focus on the Rams almost falling apart again in the 4th quarter on the road, but they were able to hold on and there are many more positives to look at.

First and foremost, with the win and Seattle’s loss, the Rams sit in 1st place in the NFC West after 11 games at 5-6 due to holding the head to head tie-breaker over Seattle.  The Rams were finally able to get the monkey on their back and win on the road.  The whole team from the coaching staff to the equipment manager were tight as a drum in the 4th quarter, but they were able to successfully run out the clock on the Broncos and keep their playoff hopes alive.  And to add a little icing on the cake, Sam Bradford threw his first 300 yard game in the NFL in the winning effort.  Sam Bradford and his receivers led the Rams to a crucial victory on the road against a high-flying Broncos squad and its impossible to look past that fact after a big game in Denver.