Falcons and Ryan Wear Down Rams 34-17 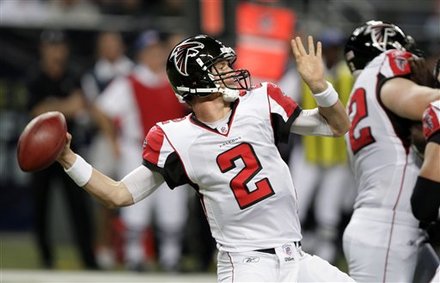 The Rams returned to the friendly confines of the Edward Jones Dome to host the Atlanta Falcons, one of the best teams in the NFC.  Atlanta sported a high-powered offense including Matt Ryan, Michael Turner and Roddy White.  The Falcons offense took advantage of the Rams defense and used all their weapons to wear down the Rams and win the game 34-17.  Even though the Rams were run over by the Falcons, they continued to keep the game close until the 4th quarter.  Sam Bradford finally turned the ball over for the first time in 5 games on a desperation drive with less than 5 minutes left in the game.  That ended the game for the Rams and the Falcons were able to extend the lead and finish the Rams off.

The Rams jumped out to a 7-0 lead thanks to a Sam Bradford play-action throwback pass to Mike Hoomanawanui and the Rams defense held tight for a 7-3 lead at the end of the first quarter.  The Rams were creative through the pass game and spreading out the defense in the run game.  However, the Atlanta offense got on track in the 2nd quarter and started turning the game towards the Falcons sideline.  Matt Ryan had the answer to the Rams pressure up front and was able to get the ball to his playmakers with plenty of time in the pocket.  The Rams defense continued their inability to cover receivers down the field and the Falcons took advantage.

As the field continued to tilt more and more towards the Atlanta side of the field, the Rams offense couldn’t break the momentum, including a failed 3rd and 1 run.  The Falcons moved the ball at will against the Rams defense, but the Rams were able to stop the Falcons in the red zone twice in a row and Atlanta settled for a field goal on their last two drives of the first half.  The Falcons went into the half leading 16-10.  The Rams were happy with being down by 6 points after the Falcons high-powered offense dominated the whole 2nd quarter.

The Rams came out in the 2nd half flying on all cylinders on offense after the defense forced the Falcons to punt.  Sam Bradford moved the team down the field with an inch-perfect touchdown pass to Brandon Gibson.  Danny Amendola kick-started the offense with a long punt return.

After two consecutive stops by the Rams defense, Matt Ryan was able to find enough holes in the leaky Rams secondary to move the football down the field for a touchdown that looked way too easy. The Rams could not cover the Falcons receivers and could not keep up with the Falcons no-huddle offense.  At one point, OJ Atogwe, Ron Bartell and Justin King were off the field with cramps and Matt Ryan took advantage throwing to Roddy White whenever possible.

The Rams vaunted pass-rush defense came into the game leading the NFL in sacks, but were completely manhandled by the Falcons offense.  The Atlanta offensive line was completely solid and Matt Ryan had the Rams blitz on the back foot as he switched the play when the Rams sold the blitz at the line of scrimmage.  Rams MLB James Laurinaitis was overmatched by Ryan and was not able to correctly switch the defense in time.  And when the Rams blitz does not come with in 3 yards of the quarterback, bad things happen.  And in this case, the bad things were long drives and long completions from Matt Ryan to his various talented receivers.  Even when the Rams committed their blitzes to the cause, they were unable to get any pressure.  With the blitzes, the Rams left even more open field for Ryan to exploit.  And Ryan took that as an engraved invitation.

The Rams offense showed signs of being the offense everyone hopes they can be with point perfect drives ending in touchdowns.  But too often they lack execution, especially on the offensive line and the Rams have to abandon the run.  The Rams defense has been heralded thoughout the early part of the season and rightfully so, but they were exposed today.  The blitz did not work, the Rams couldn’t get pressure on the quarterback when they needed it and wore down as Atlanta continued to hold the ball.  The Falcons are a great offense and the Rams are not the first team to fall to them this season, but it was not pretty from a defensive perspective.  The Falcons are a better team than the Rams and they showed it on Sunday with a 34-17 victory at the Edward Jones Dome.