NFL should say “sorry” to Eagles for bad calls 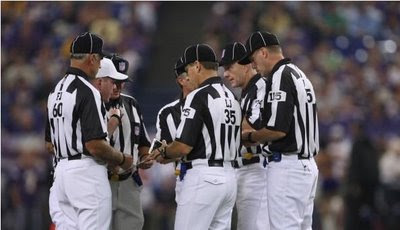 No matter what the outcome of a game is, I hate to blame the officiating. They’re humans and they make mistakes. However, the officiating in the Eagles and Colts match-up has to be some of the worst I’ve seen in a long time.

The Eagles racked up a total of total of 14 penalties against the Colts, and the team is solely responsible for a lot of them. However, there were instances where the refs got calls wrong. Not just wrong, but there were instances during the game in which I couldn’t believe what I was seeing.

The first major call I disagree with was the call on the hit by Quintin Mikell on Austin Collie. I don’t understand how he was classified as a defenseless receiver. Is he supposed to get a free ride because he’s catching a ball down the middle of the field? Can a safety not make a play the way that Mikell and Nate Allen did? Mikell lead with his shoulder on the play, just as you are supposed to. Allen may have had helmet to helmet contact, but it only came as a result of the way Collie’s body was deflected into him.

I think the refs got this one wrong, but the NFL has a chance to get it right. The play will be reviewed by the NFL for possible fines. If any are given, that is an absolute joke. The NFL will also have the ability to review the play and determine if they think the referees got it right. If not, the play should be used as an example as a hit that doesn’t require a flag to be thrown.

I thought that was bad, but I think the call on Trent Cole in the fourth quarter was even worse. As Cole came flying around the edge to try and make a play on Peyton Manning, he didn’t have a good enough angle to get a full hit on Manning. As his momentum carried him past the quarterback, his hand hit Manning in his helmet. It wasn’t a very hard knock to the head, but apparently it was enough to receive a personal foul call.

The worst part of the penalty was that it was fourth down and the Eagles should have received the ball, pretty much ending the game. However, the penalty allowed the game to continue and the Colts took advantage, closing the gap.

There has always been a focus in the NFL on protecting the quarterback, but this call was a bit much. Cole’s actions were not intentional, and as he held his arm out with his momentum carrying him beyond Manning, his hand happened to find the back of the quarterbacks’ helmet. This was a huge call to get wrong and gave the Colts a chance to win the football game.

We’ve been seeing this stuff for a while now. This is the game of football. You don’t want to see players get hurt and I understand that they’re trying to protect everyone. However, the physical part of this game is what draws everyone to it and the players know what they’re getting into.

The NFL is taking a lot away from this game right now and the Eagles felt the wrong end of the stick on Sunday.