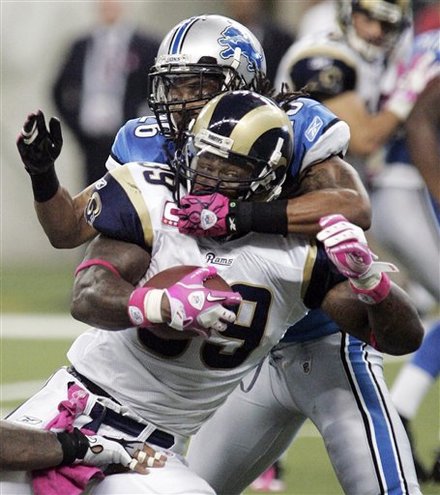 The Rams started off their game against the Detroit Lions like they were afraid of the Lions.  An onside kick on the opening kickoff that failed miserably and inspired the 0-4 Lions quickly and easily.

As we saw later in the game, the Rams understandably did not trust their kickoff coverage unit or their defense against the Lions.  Perhaps the Rams staff knew something that us fans did not.  The Detroit Lions are considerably better than the St. Louis Rams.

The Rams were presented with some serious adversity as the game started to get away from them and they folded like a house of cards on offense and defense.

The worst news for the Rams in the long term is the loss of Mark Clayton for a handful of games, if not the rest of the season.  Because the Rams cannot have anything nice, their inspired new #1 receiver that had formed a great connection with Sam Bradford was lost to a serious knee injury.

There was no word on how many weeks Clayton was going to be out with his injury, but he was carted off the field and immediately fitted for an air cast.  Neither can be considered a good sign.

Just as the opening onside kick showed no confidence in his own team, the Rams responded accordingly – playing with zero confidence against a capable, but winless Detroit Lions team.

After the Rams tied the game at 3, they were never closer to the Lions as the kickoff was run back by the Lions’ Stephan Logan for 105 yards as he went through Rams arm tackles and fallen Rams defenders

The Rams defense was exposed away from home against the best defense they had played all season.  They were unable to get pressure even with blitzes and Shaun Hill was able to find open receivers.  The Rams defense received a lot of hype this week and they looked exposed against the Lions.

Not many teams have an answer for Calvin Johnson and neither did the Rams.  Johnson was held without a catch into the 2nd quarter, but soon Johnson put his imprint on the game with a TD catch, an almost TD catch and drawing a defensive penalty.

The Rams were dominated, destroyed and embarrassed in every facet of the game.  They got run over on special teams, torched on defense and flattened on offense.

The Rams were in desperation mode in the beginning of the second half as the Lions went quickly down the field for a touchdown.  They were unable to get anything going and continued to turn the ball over.

The Rams fell back to Earth and further into their previous depths in another blowout.  Just as the Rams started to look better in 2010, they looked as bad as they have looked in 3 years against the Detroit Lions at the site of their only win in 2009.

Everyone on the Rams sideline and organization should be embarrassed by their display on the field in Detroit.  The Rams got down after injuries, turnovers and mistakes and they never were able to turn the game around.