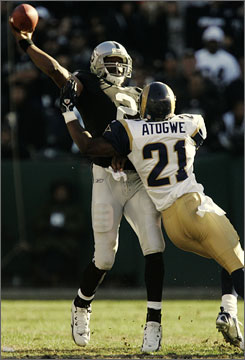 The Rams will try to get their first win of the season and even up their record at 1-1 as they head on the road to face another vulnerable team in the Oakland Raiders.

The game will be shown live in St. Louis because it is an away game, but not if you live in Oakland because it must not be a sellout.  But, if you are outside the Oakland market but not quite to Los Angeles, you will get the game.  It’s weird, just check out the map. Sorry LA fans, if you would get any game I thought it would be this one, but not this time.

The Rams struggled to find a way to win against the Arizona Cardinals, a team that is accustomed to winning both in the regular season and in the playoffs.  The Raiders are not as seasoned as the Cardinals and got blown out in Week 1.  If the Cardinals were ripe for the taking in Week 1, the Raiders are almost over-ripe.  Will they bounce back from the blowout against Tennessee, boldened with the Black Hole behind them?  Or will they turn over if the Rams take an early lead?  This is a great chance for the Rams to play a team that is equally as downtrodden in the past few years as they are.  If the Rams are going to win 4-6 games this season, this is a game they must win.