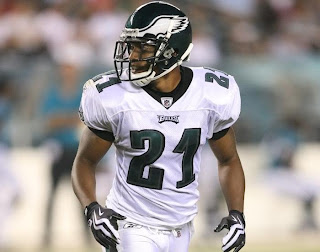 The Eagles starting corners this year may not be the best duo in the league, but I’m convinced that they can hold their own. What I’m not convinced on is the ability of the players behind them.

In last Friday’s game against Jacksonville, we only saw the combination of Asante Samuel and Ellis Hobbs for a total of six plays. However, both players were able to make plays in that short amount of time. I really liked what I saw and I’m looking forward to seeing them on the field for a longer time this Friday against the Bengals.

Behind Samuel and Hobbs, we saw an array of Eagles corners come in the game last week and look terrible. They were burned multiple times by receivers for touchdowns and you have to be worried. Joselio Hanson is one of the favorites to be the nickel corner, yet we saw him get torched last week. I’ve always been high on Hanson as a player, but last week was embarrassing.

Dimitri Patterson is a player that caught my eye last year on special teams. He didn’t get the chance to see the field much on defense, and I think we may have been shown why against the Jaguars. Patterson did not look very good and will need to prove he can have value outside of special teams if he wants to remain on the roster.

Trevard Lindley is a guy to keep an eye on as the preseason continues. He hasn’t done anything to make people really pay attention to him, but I think he has it in him. I think Lindley has a physical style that many of our other corners do not, and I want to see him translate that into making some plays.

One guy that we haven’t seen much of yet that can hopefully bring us some hope is Macho Harris. After being featured mostly at safety in 2009, he has moved back to the corner position. Macho did a good job last year in nickel type situations where he was responsible for shutting down high caliber tight ends. He is a guy that had a chance at being the starter at right corner but has been slowed down by injuries. I’m hoping to see him get back on the field playing at a high level.