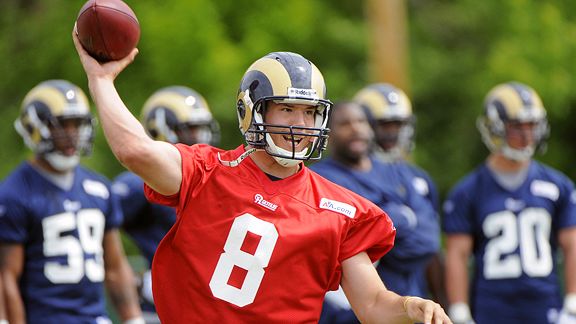 Glowing quotes in the St. Louis Post-Dispatch are easier to find in minicamps and OTAs than any other time of the year, but they are great to hear none the less.  The best type of glowing quotes are when the are in the direction of the rookie quarterback.

Rams wide receiver Brooks Foster who lost the entirety of last season due to an injury in training camp had this to say about his work with Bradford:

“I’ve never been around anyone like that. He throws a real good ball, puts a nice touch on it for the receiver. … Everything that you hear about him is true.”

Bradford is working with the 2nd and 3rd teams which is why he is throwing most of his passes to Brooks Foster and not Donnie Avery.  None the less, Bradford is hitting his receivers in the hands and on the numbers right when the ball should be there.

Rarely will a coach have anything but good things to say about his rookie quarterback before even training camp has started and Steve Spagnuolo continues that tradition with Bradford:

“He’s putting the ball in the right places and seems to be catching on with the offense,” Spagnuolo observed. “So, the progress is good.”

So, we can pretty much count Spagnuolo for the quote “the progress is good” from here to Week 1 and that is fine by me.  The Post-Dispatch returns to the quotable Mr. Foster for the last quote:

“He puts the ball on the money, his play-calling is really good, and he carries himself like he’s been there before,” Foster said. “I feel like I’m going to have a good time playing with him.”

That quotes sums up everything you want in a franchise quarterback: accuracy, huddle command and leadership.  As long as the quotes continue like this for the rest of the season, the Rams are going to have a very good idea about what the have with their franchise quarterback.  And that is a very, very good thing.