Who Is The Colts Next Best WR After Reggie Wayne? 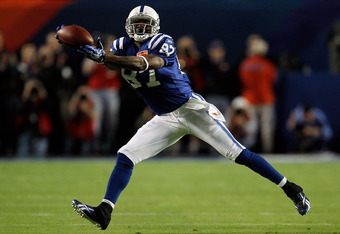 The Indianapolis Colts have been ruling for nearly a decade on the passing attack.

We’ve seen Peyton Manning throwing to Marvin Harrison all the time, including a season where both connected for 143 receptions, as it became the best quarterback-to-wide receiver tandem in the National Football League.

When Marvin left, it made a hole in the Colts’ receiver spot. Colts’ fans knew Reggie Wayne will live up to expectations in the 2009-10 NFL season, and he did. And Anthony Gonzalez was there to help.

Meanwhile, Pierre Garcon and Austin Collie will look to come in at times when there are three or four receivers up by the line of scrimmage.

But those plans went spiraling downward when Gonzalez was out for a few weeks. Those few weeks would later turn into number eleven being out for the whole year.

As the season went by, we saw how good Pierre Garcon and Austin Collie really were.

We saw one of the bests, if not the best, season of Peyton Manning’s career as he led the Colts to a 14-0 run. The Colts would later strive in the playoffs and finish the year off as the second best team in the league after…well you know exactly what happened in February.

Now the Colts are looking for something better this season: being the number one team. Isn’t that what every NFL team wants to be? Do the Colts want it? I guess we will have to see, won’t we?

But the Colts built themselves up well in the off-season. Though, yes, they had some releases of players. Yes, some of them were questioning, but the Colts know what to do. Hey, they released Marvin Harrison and they turned out great.

But the big question for the off-season and as training camp and the pre-season comes up: what should the Indianapolis Colts do with their wide receiver corps?

Anthony Gonzalez is returning and we saw how great Pierre Garcon and Austin Collie are and how important they are to the white and blue. We know that Reggie Wayne will be the number one receiver and it brings questions of what they will do for the second and third spot.

I have a feeling it will be Pierre Garcon and Anthony Gonzalez fighting for the second position, so they can be on the opposite side of Reggie Wayne most of the time when the 60-minute game starts.

Whoever wins will probably battle Austin Collie at the slot receiver spot, or just win it just like that. But it is going to be a real big battle here. I think Garcon is the second best receiver.

He didn’t have a chance to prove how good he was to the Colts in the 2008-09 season. But last year, he showed what he really was. And that injury that hit Gonzalez really is going to effect him.

Garcon will win the second spot and Anthony Gonzalez and Austin Collie will fight for the third spot. I always had this idea of the Colts trading Gonzalez. They could do that. But I think Indianapolis will pass on that.

So I guess the fans will have to decide. Who should win third spot: Collie or Gonzo?

This season is going to be fun!