Will Michael Vick have a bigger impact for the Eagles in 2010? 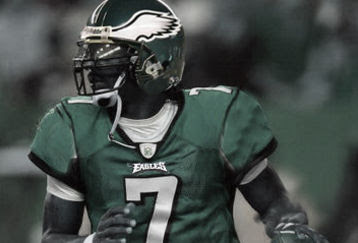 Although it wasn’t as early and often as Eagle’s fans hoped, Michael Vick did show some flashes of brilliance last year. From what I’ve heard, Vick is looked faster in mini camp than he did during the season last year. This leads me to wonder if we’ll see increased production out of Michael Vick in the 2010 season.

One thing that might help Vick produce more this season is the change at starting quarterback. Kevin Kolb doesn’t have the type of ego Donovan McNabb had. We heard McNabb make comments the first time Vick ever played in a game with him during the preseason about how he didn’t like coming off the field. Whether he thought it messed up the rhthym or not, I think he just didn’t like sharing the spotlight with Vick.

With Kolb leading the offense, you don’t expect any type of backlash like that. I believe the Eagles will keep drawing up plays for Vick and will really hone in on the best opportunities to use his skill set. We saw how good he could be in the red zone towards the end of the season last year.

Hearing that Vick looked really fast in mini camp makes me very excited. If you watch highlights of the plays he made with his feet in Atlanta, it’s just plain stupid. I don’t know if he can ever get back to that point, but if he can get close, he can pose some serious issues for defenders.

The fact of the matter is that the guy is on the roster and is getting paid a lot of money to be there. As much as I think Kolb can do amazing things for this offense, I still want to see Vick on the field making plays. You know he has it in him.

What impact do you think Michael Vick will have in 2010?

3 Responses to “Will Michael Vick have a bigger impact for the Eagles in 2010?”