Side Effects of Violence in the NFL are Many 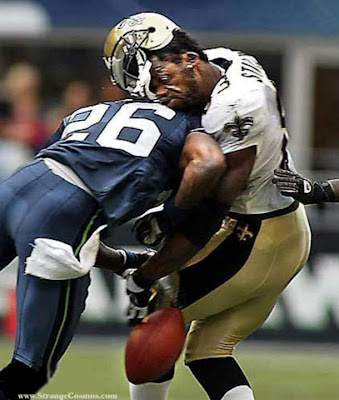 This is a bit of a departure from my usual fare surrounding the Rams and daily roster moves, rumors and scuttlebutt, but something that has been banging around in my head a bit and thought I would throw it against the screen and see what I got.

What type of person are we fostering by supporting the NFL and should we be surprised when an NFL player acts violently towards another person off the field?  The culture of victory through violence is prevalent

SI.com’s Ross Tucker ho-hums through an article explaining away choking, fighting, spitting, helmet swinging and kicking all in the course of practice and games.  He treats this type of violence as a normal part of the game and practice, which by all accounts it probably is.  After Tucker was hit in the side of the head by a helmet, he was scolded by his coach for not “winning” the fight.  He was hit in the side of his un-helmeted head by a weapon which more than likely caused him to need stitches.  The focus after this attack was not on right and wrong, but on victory through violence.  The other player committed an act that would be against the rules in the field of play!  Yet the player who swung the helmet was the “winner” and received no punishment and only praise.  Again, during a practice a player committed an act of violence that was considerably outside the rules even in the NFL.  The victim of this violence was blamed for not escalating the violence further.  What did the coaches want Tucker to do?  Should he have pulled a gun out of his sock?  Where is the line with violence?  The coaches will not decide right and wrong only winning and losing.  The coaches and players think that ingraining this culture of winning will help them win on Sundays, but what are the side effects?

I take a look at the side effects after the jump.

The culture of the NFL breeds violence into its players so intricately that scuffles and fights after the play are still important for the player to “win”.  No altercation can ever be lost.  The players are indoctrinated to refuse to lose any physical or violent altercation.   Are we surprised when this mentality bubbles over into the players’ off the field behavior?  The NFL is not alone in this as high school, college and even pee-wee level coaches are breeding violence into their players as well.  But pro coaches take it to the next level because the players earn their paychecks through increased levels of skill in violence.  More and better violence equals an increase in pay and increased standing and attention in society.  More violence equates to more cheers and more money.

Now, off the field, if a player is in an argument in a restaurant, bar or with a significant other and they are pushed to their breaking point – should we be surprised with the conditioning ingrained by the football culture comes through?  One could point to a few alleged incidents in the past year or so to make it clearer.  Steelers QB Ben Roethlisberger allegedly has serious issues with violence against women as he was accused of rape twice within a year.  Late WR Chris Henry of the Cincinnati Bengals reportedly jumped on the back of his girlfriend’s truck as she was driving away when they were arguing.  There are plenty of examples within our own St. Louis Rams.  Steven Jackson was alleged to have beaten up his pregnant girlfriend.  Lawrence Phillips had many problems including driving his SUV through a field of football players who had just beaten him at a game.  Phillips reacted violently when he was confronted with a losing situation.  Additionally, Dominique Byrd stabbed someone at a bar with a broken bottle during an altercation.  There are plenty of examples of violence off the field by NFL players that could be sited and there are certainly more that do not see the light of day.

Obviously, most players are able to keep their violence on the field and their lives off the field separate at all times.  I do not seek to cast a wide net and implicate all players and all coaches, but I just wonder what violence a culture of violence creates.  There are obviously other problems with players that can lead to violence including too much money, a culture of “yes” people surrounding the players off the field.  Many players are allowed to do whatever they want off the field by coaches, college administrators and even their family that they feel overly entitled as well.  The problems with some players go beyond the culture of violence, but violence still permeates the NFL and football culture.

There are many more violence pastimes than the NFL that people enjoy with MMA and boxing as examples, but Ross Tucker ends with this quote:

[The NFL] is the last bastion of pure, unadulterated, testosterone-laden barbarism. That, of course, is a huge part of why it is so great and we love it so much.

I’m not quite sure how I even feel about this because I love football and the NFL, but I wonder what our money for tickets, merchandise and TV packages is paying for as the violence in the NFL only creates more violence.  Are we as fans at fault for supporting a institution that supports and ingrains such violence in young men?

I don’t have all the answers and I don’t think anyone does, but this is just something I was thinking about.  What do you think?