Some perspective from the Buffalo selection of RB C.J. Spiller 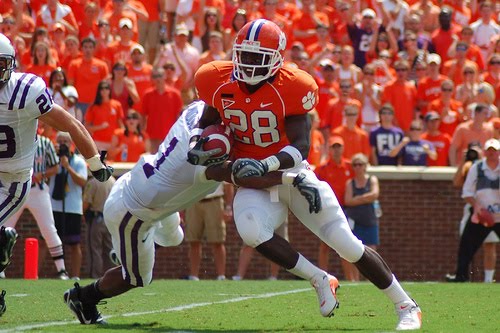 It’s hard to narrow down my feelings in just a few short words about the Buffalo Bills selecting Clemson RB C.J. Spiller at No.9 in the first round of the 2010 NFL Draft.

I’m neither totally opposed or up in arms, however I am excited about what Spiller brings to table for the Bills.  He’s been viewed as Chris Johnson 2, and if that comparison ever draws similar results to what Johnson’s achieved so far with the Tennessee Titans, then the Bills may have gotten the best player in this entire draft.

You can’t deny what Spiller brings to the table for the Bills offensively.  He’s everything they’re lacking: speed, a home run threat everytime he touches the ball and he brings excitement.  He’s a tremendous football player who could become an NFL star.  In my estimation, even though he’s yet to play a down, field a kick off or punt return, or take a handoff, Spiller becomes the Buffalo Bills’ most explosive and dynamic offensive weapon.

And that’s ultimately what this comes down to.  This was an offense that ranked 30th in the NFL  a year ago, and it’s been an offense that hasn’t had many serious threats on the offensive side in the ball in a long time.

And take a look at the players in their division: Tom Brady, Randy Moss, Wes Welker, Mark Sanchez, Braylon Edwards, Santonio Holmes, Brandon Marshall, Ronnie Brown and Ricky Williams.  Each of those players is dynamic in their own ways, each capable of getting into the end zone.  Their division counterparts have multiple weapons that can hit paydirt.  While the Bills don’t nearly have as many touchdown threats, Spiller is definitely a start in the right direction.

If I wore the Bills GM hat, my choice would have been Notre Dame QB Jimmy Clausen, and it wouldn’t have been close.  Which is why I’m behind a computer and not in the front office, because as it stands now heading into Round 2 Clausen is still available and tops the list of the best available prospects.

So GM Buddy Nix turned out to be true to his word.  He warned us not to get the Bills pinned down to what we thought they needed to do or what they should do.  When the Bills were on the clock, three of the draft’s top tackle prospects had come off the board and the top defensive tackles were gone as well.  The Bills didn’t not consider a pair of offensive tackles, Anthony Davis and Bryan Bulaga, to be elite picks at that point.  The same can most likely be said about DT Dan Williams.  Buffalo didn’t settle for the third or fourth best prospect at a position; in the end, they went after the best, highest rated player available at his position.

One Response to “Some perspective from the Buffalo selection of RB C.J. Spiller”