« Why the St.Louis Rams have been oh-so bad
Recapping the Lions in 2010 free agency »

Steelers to let WR Santonio Holmes walk after the 2010 season? 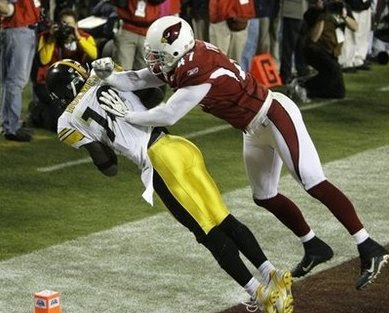 Of course it’s been a tough offseason for Santonio Holmes, but seeing this below has to be somewhat of a surprise, and that’s the Steelers are not all that happy with Holmes, and that they will let him walk as a free agent next offseason:

It sounds like this will be the final year for wide receiver Santonio Holmes in Pittsburgh. Ken Liard of ESPN Radio 1250 Pittsburgh is told that Holmes doesn’t believe the Steelers will pay him what he believes he’s worth when it comes time to negotiating a contract extension (his current deal expires after the 2010 season) and that Holmes would rather play in a big market after this season. Couple this with what Steelers Insider Ed Bouchette of the Post Gazette has said, that the organization is “furious” about Santonio’s language and brashness on his Twitter account (twitter.com/santonio10), and it adds up to a near-future parting of the ways between the Black and Gold and their former 1st round pick (2006) and former Super Bowl MVP.

Sure Holmes’ mouth may be too big and gets him in trouble, but the last time I looked around the league, I didn’t see a lot of choir boys playing wide out. Bottom line, Holmes is already a Super Bowl MVP, and has made big plays throughout his career so far, so the Steelers better think twice before they simply let him walk away.