« Lynch skips out on Bills voluntary workouts
QB Bradford not to be inked before the start of the draft? » 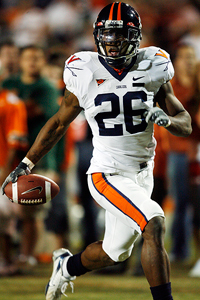 As we mentioned today, the Vikings curiously opted to work out Virginia cornerback Chris Cook on an individual basis today despite the fact that they usually work out prospect in a group format.  The group workout is scheduled for April 6th and 7th.

According to Wes Bunting of the National Football Post, the Vikings “love” Cook and could very well make him their first choice in April’s draft.

I find it hard to believe that the Vikings would tip their hand so early in the process, so it could very well be a smokescreen.

Then again, a big cornerback with sure tackling abilities and the ability to play safety could be just what the doctor ordered for this defense.