« Owens in the mix for a landing spot in Washington?
Would the Steelers actually consider dumping Roethlisberger? » 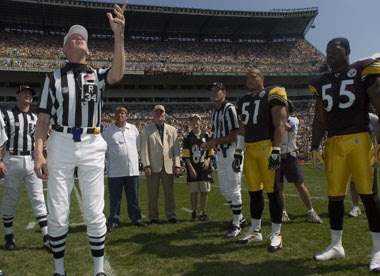 National Football League owners today said “yes” to a change in overtime rules, starting with the playoffs after the 2010 regular season. The rules will modify the sudden-death format and prevent a team from winning a game with a field goal on the opening possession. The vote was mostly in favor of making a change, going 28 to 4.

The teams voting against it were the Buffalo Bills, Minnesota Vikings, Baltimore Ravens and Cincinnati Bengals. “It was really a good discussion in the sense that there’s been a lot of debate, both publicly and privately, over the rule — which is always good,” Competition Committee co-chair Rich McKay said in announcing the vote. “We’ve had this discussion for a number of years. We felt like this proposal, which we call ‘modified sudden death,’ was really an opportunity to make what we think was a pretty good rule — sudden death — even better.”

The new OT rule means that the team receiving the kickoff can’t end the game on the first possession unless it scores a touchdown. “Part of the reason we have different rules is we have different consequences,” McKay said. “The consequences in the postseason are, go home if you don’t win. In the regular season, we have 15 other games.”

ESPN’s Adam Schefter says that the owners will talk about possibly making the new OT rule a fixture in both the postseason and the regular season, and will start to talk about that in May, and possibly vote to include the new overtime rules in the 2010 campaign.

One Response to “Overtime rules changed starting with the 2010 postseason”