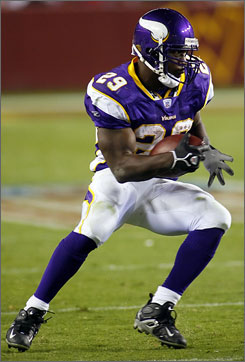 Julius Peppers isn’t the only name free agent that will be at Halas Hall on Friday, as running back Chester Taylor will visit the team also.

Running back Chester Taylor is expected to visit with the Bears Friday, according to a league source. Taylor would seem an ideal fit to complement Matt Forte in Mike Martz’s offense, which highlights the running back position. Taylor has served as a valuable backup to Adrian Peterson, particularly on third downs because of his ability to block, run and catch the ball.

To ink Taylor would also hurt the Vikings, which means it’s an even better move for the Bears, who would not only make their team better, but hurt the team that won the division as well.