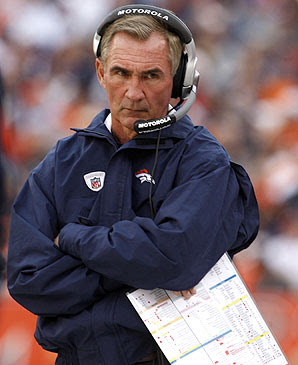 It appears that the Redskins are moving quickly when it comes to finding a coach to replace the soon to be fired Jim Zorn. The Denver Post reports that former Broncos two-time Super Bowl winning coach Mike Shanahan is in talks with Washington about coming aboard for 2010.

The report comes out a day after the Redskins hired Bruce Allen, son of late Redskins Hall of Fame coach George Allen, after Vinny Cerrato abruptly resigned. For now Allen says that Zorn is still his coach. “Give us some time to see how our relationship develops,” Allen said.

Shanahan is at the top of a lot of teams lists it would seem to come in as head coach in 2010. The Bills after they fired Dick Jauron had interest, but it never moved past a few talks. Now the Skins, who are in the midst of another tough season at 4-9, seem to be ready to move forward with a new coach for next year.