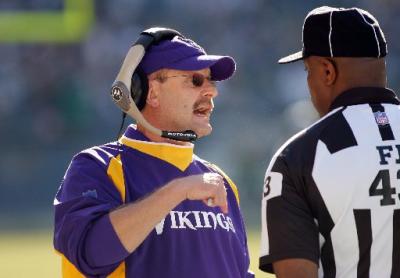 Just months ago Vikings coach Brad Childress was on the hot seat. Now he is reviewing an offer from the team on a contract extension. Childress spoke briefly to reporters after practice Thursday, but did not say an agreement has been reached. He said there was a document waiting on his desk that he intended to look over. His current deal runs through 2010.

Citing an unidentified source, ESPN.com reported that the extension would keep Childress in Minnesota through the 2013 season. Childress was hired in 2006 by owner Zygi Wilf, and the Vikings have improved each year under his watch. They went 6-10 in 2006, 8-8 in 2007 and 10-6 with an NFC North title last season.

With Brett Favre at the helm, the Vikings are 8-1 and battling with the undefeated Saints for the top seed in the NFC.