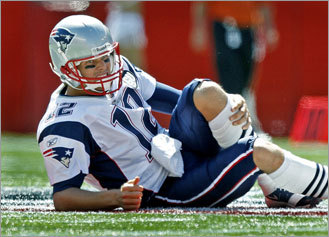 It looks like the season is over for Tom Brady, and likely the hopes of getting back to the Super Bowl for the New England Patriots. Michael Silver along with various sources are reporting that Brady suffered a torn ACL in today’s win over the KC Chiefs, meaning that he will be out for the entire 08 season. “It’s bad,” a team source said in the story. “We’re going to have to play without him.”

Brady was hurt in the first quarter of Sundays game when safety Bernard Pollard lunged into him on a pass play and hit him. Brady laid on the ground in pain for a few moments, then left the field to have tests. WR Randy Moss, upset at the hit by Pollard, called it dirty. “Like I said, I didn’t really see anything; I was running down the field. When I came back in [and watched it], it looked dirty to me. I’ve never been a dirty player. I honestly don’t even know how to play dirty. I just play the game. Any time you see something like that, that looks foul, it looks dirty, it opens your eyes. So, me personally, it looked dirty.”

If Tom Brady can’t start in Week 2 against the Jets, the third-longest active starting streak among NFL quarterbacks will end.”He was in a lot of pain. When you hear a scream, you know that,” Kansas City safety Bernard Pollard said after hitting Brady on the left leg midway through the first quarter.

Untested Matt Cassel took over, and played well as the Patriots beat the Chiefs 17-10 in Sunday’s opener. But they needed a last minute defensive stand to do it. Cassel had thrown just 39 passes in his career before Sunday and completed 13 of 18 passes for 152 yards and a touchdown. Cassel, who backed up Carson Palmer and Matt Leinart at USC, hasn’t been a starting quarterback since high school. He won a competition with Matt Gutierrez during the preseason to retain the job as Brady’s primary backup.