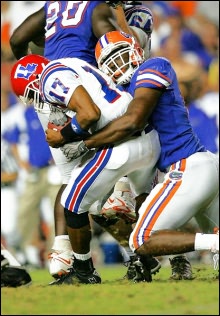 ESPN is reporting that Derrick Harvey has agreed to a 5 year, $30-million contract that includes just over $17-million in guaranteed money.

If true, Harvey’s team record 33-day rookie holdout would be over. Harvey wouldn’t likely be available for tomorrow night’s game against the Redskins, but the next question would be about his availability for the season opener on September 7 at Tennessee.

Harvey is the last draft pick in the NFL to sign. According to the report, the base package is worth $23.8 mllion, but if Harvey becomes a Pro Bowl player, he could earn up to $33.4 million over the five years of the contract.