« Jaguars Last Offer to Derrick Harvey was $16.8M Guaranteed
Warner Could Get Nod for Start Against the Chiefs »

Reports Say Boller with the Lead in the Ravens QB Battle 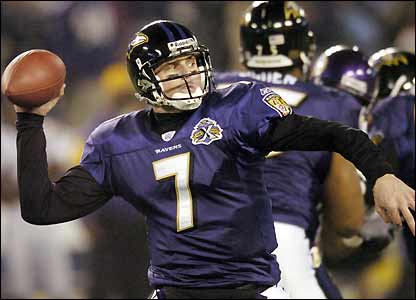 One of the biggest questions of Ravens camp has been who is going to finally emerge as the teams starting QB.  The Baltimore Sun shed some light on the battle today, stating that as of right now, Kyle Boller should be the Ravens’ Week 1 starter.

Boller has not been outstanding in practices, but the big thing right now has been the fact he’s been consistant, and has not been making the mistakes fellow QB’s Troy Smith and rookie Joe Flacco have been.  Reports say that Smith has been “wildly inconsistent” and Flacco is still trying to learn what it takes to be an NFL QB, though there is not doubt he’s the QB of the future.

Smith will get the start on Saturday for the Ravens, and Flacco is going to get more chances as well, but the team may be smart with for now simply going with the veteran presence of Boller, and if he gets off to a bad start or struggles, then turn the ball over to either the sophomore Smith or the rookie Flacco.