« Horn Back at Practice; Still Wants Out of Atlanta
Jaguars Last Offer to Derrick Harvey was $16.8M Guaranteed »

No Word From NFL On Possible McKinnie Suspension 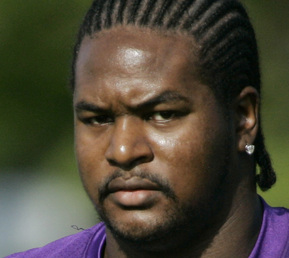 No word as of yet from the NFL in regards to a speculative report that states that Minnesota Vikings offensive tackle Bryant McKinnie is likely to be suspended for four games for violating the league’s personal conduct policy, according to Don Seeholzer of the Pioneer Press; Sirius NFL Radio initially reported the news during its Wednesday afternoon update, but an NFL spokesman has said that there’s nothing to announce at this time.

McKinnie currently faces 4 charges, including a count of felony aggravated battery, stemming from a February fight outside a Miami, FL nightclub; he has plead not guilty to all charges and is scheduled to appear in court on September 24 in Miami-Dade County Court.

One Response to “No Word From NFL On Possible McKinnie Suspension”