« A Quick Look at Predicted Divison Winners for 2008
Maxim: How Are Madden NFL 09’s Ratings Decided? »

Saints DT Thomas Out for Up to Two Months 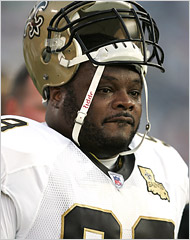 Defensive Tackle Hollis Thomas tore his right triceps on Wednesday during pass rushing drills and will miss up to two months. Thomas had an MRI that afternoon and underwent surgery Thursday morning. The Saints may end up putting Thomas on injured reserve but the Times-Picayune speculated that the injury could possibly be career-ending after 13 years in the league.

The loss of the 34 year-old leaves the Saints with veterans Kendrick Clancy, Antwan Lake, Brian Young, Orien Harris and rookie Sedrick Ellis at the position. The Saints website quotes fellow tackle Brian Young as saying “These things happen, though, and while it’s hard to see a teammate and someone as likable as Hollis get hurt, we know we have the talent to keep going. We have some really good depth at the position and a good mix of older players and younger players and I think we’ll be okay.”