Bentley Says No to Lions One-Year Deal Worth One Million 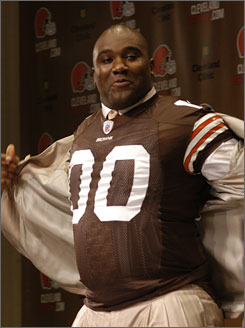 The Lions appear to be in the market for some O-line help, as reports say that the team offered former Saints and Browns center LeCharles Bentley a one-year deal.  ProFootballTalk.com is reporting that the Lions gave Bentley the offer, but he turned it down, as he’s still looking for a longer deal and a chance to start.

The deal the Lions offered according to the site was for one-year at $1 mil.  We had reported weeks ago that up to seven teams were interested in Bentley, but right now he appears to be in the same boat as QB Daunte Culpepper, as both appear to think more of themselves than the teams that are offering them one-year deals and no promise of starting.

The biggest thing with Bentley is his health, as even though he was able to pass the Browns physical awhile back before asking and getting his release, there is no for sure that he has what it takes to stand the rigors of a 16-game season.