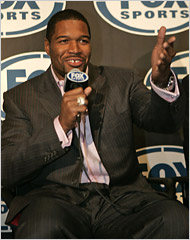 It did not take new Fox TV analyst and former Giants DE Michael Strahan to start stirring the pot about his old team in the Big Apple. Strahan took a bit of a shot at the Giants when asked about wide receiver Plaxico Burress, who is seeking a new deal from the club. Strahan said that Burress should get what he’s worth.

“Obviously, he is underpaid for what he does and brings to the team,” Strahan said of Burress. “For him, in his defense, it is the right time to do that. But to be honest with you, in professional football, there is no loyalty, there is really no contract.” Strahan’s comments fall right in line with former Giants RB Tiki Barber, who spent part of his first season of retirement taking shots at his former team while working for NBC.

“Do I seem gun-shy to you?” he said. “I’m different than Tiki. So if I were to say something, I’m just going to tell you the truth. And for me, if I say something, I think a lot of people expect that.”

Now it’s Strahan’s turn, as he took part of his first press conference as a member of the media sticking up for Burress, who last season played most of the year hurt, catching 70 passes in 16 games for 1025 yards and 12 TD’s. Burress has already said he feels that a new deal will get done before camp starts in late July, we’ll see if Strahan’s comments about his former teammate being underpaid pushes the talks along even just a little bit.